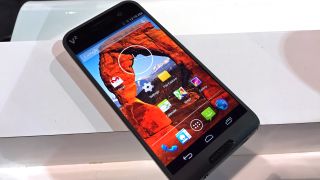 It's specs over design - but sometimes that's fine. And it rhymes.

You won't have heard of the Saygus V2 unless you were one of a handful of people to take a punt on a completely unknown brand last year.

But that hasn't stopped the US-based firm from making one the most impressive smartphones at CES 2015.

Let's get the main problem out the way first: this is a chunky handset, and not really made with premium design in mind. It's nearly a cm in thickness, which might as well be one of the original brick phones in the minds of some consumers.

But that's not what Saygus is about – nor, do I suspect, is that something the brand is keen to focus on when setting out to try and nab a portion of the massive smartphone market.

Chris Baker, VP for corporate development at Saygus, told me that the company was trying to make the phone it wanted to see, which is where innovations like dual microSD slots come into play.

On top of that you've got a 5-inch Full HD display, 3GB of RAM, a massive (removable) 3100mAh battery (which, according to Baker can last 50% longer than other phones with the same power pack thanks to an extra battery chip under the hood) and a Snapdragon 801 chipset.

It's got two of the most powerful cameras on the market too: a 21MP rear facing option and a 13MP option on the front, destroying even the pointlessly well-endowed HTC Desire Eye – and that's before you hear both sensors have optical image stabilisation.

There's an infra-red port on the top, front facing Harmon Kardon speakers above and below the display and a 60GHz mobile beaming capability for sending pictures directly to your TV or monitor.

In fact, add in the fact it's got Qi wireless charging built right in and you could feasibly have a mat at work where you chuck the phone down and an NFC tag will instantly beam the signal straight to a monitor, Bluetooth mouse and keyboard could auto connect and the 3GB of RAM could easily handle loads of apps – that's a PC substitute right there.

And I haven't even got to the bits that developers will love: the phone is completely open with root access and can even dual boot between stock Android and any ROM you care to mention.

Even the design of the phone – the chunkiness of which makes more sense now when you consider what's packed in there – has a function, with the fractal pattern on the back of the Kevlar fascia boosting your phone's signal by up to a bar, according to Baker.

The Saygus V2 is, simply put, a really interesting phone. It's miles behind the rest when it comes to design, looking like an unimpressive brick next to the brilliance of the iPhone and HTC range.

But that's not what this phone is about. It's about finding some really top components and combining them with industry staples to outperform what's out there already. The dual-slot microSD is a nice idea, and it'll be interesting to see if that can handle 256GB cards when they appear – the theoretical maximum of 320GB right now could be pushed to over half a terabyte.

This is a phone for the tinkerer, the person who wants to not compromise on anything apart from design, letting them change channel on their TV while remotely playing a game on another monitor, or watching a movie with clear front facing speakers.

There is a caveat here though, and it's a big one: while engineering samples were floating around CES, there was a lot on these phones that I couldn't test properly. There were no sound files loaded on the handset, so it's hard to find out if those speakers really can take on HTC's Boomsound.

The cameras are powerful, but likely unoptimised at this point. The price point has yet to be set (although a little lower than the top flagship phones was what I was told). The screen and chipset are nothing special and I was unable to test out whether the dual-slot storage would really be able to seamlessly slip from one card to another.

But I get the feeling this is a phone designed for a community that will forgive such things if the handset actually works and offers all the goodies they've been looking for. The Saygus V2 is like a more hardcore Nexus.

It's smaller and more easily handled than something like the OnePlus One, which is currently many enthusiasts phone of choice. However, I'd estimate it's going to come in at around 70% more to buy SIM free, which will put off a few prospective buyers.

It's also unclear how a completely unknown brand can compete in an already saturated market without a massive marketing budget. OnePlus did it on a spec and price combo, where Saygus will have to hope communities get behind the power it puts on offer.

Still, it's so refreshing to see a phone company just trying to make a handset that really caters for the smaller subset of smartphone users looking to get the most out of what Android can do – the Saygus V2 could very well be your new phone if that's you.