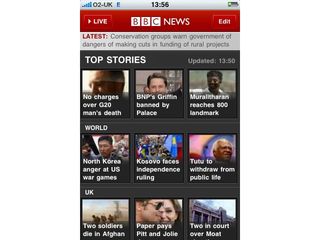 The BBC News app goes live for the iPhone

The BBC has finally been given the go-ahead by the BBC Trust to launch smartphone apps - meaning it can extend its reach of its news service.

The BBC News application will launch on the iPhone and iPad from today, with BlackBerry and Android applications coming later in the year, according to Erik Huggers, director of the BBC Future Media & Technology:

"We know that increasing numbers of you want to access BBC output on-the-go and the rapid growth of internet-connected mobiles and smartphones in the market means we can cost-effectively provide our content and services on these devices, and this is a really important way for us to deliver online services in the future.

"The first class journalism that you expect from the BBC is now available to you in a way that is simple, personalised and optimised for mobile devices."

Users will be able to view the applications in both landscape and portrait, and have access to live streaming of the news channel, as well as regular updates to headlines and news stories.

The BBC Trust has been assessing the option of putting smartphone applications together from the BBC, to make sure it doesn't infringe on anti-competitive rulings.

Fingers crossed we'll be seeing more than the BBC News app out there - we want a heavy dose of BBC Sport every day too.