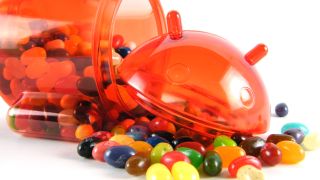 The firmware looks to be a beta version of a 4.1.2 ROM, the same software that's currently rolling out to Samsung's flagship Galaxy S3 device. The leak comes courtesy of XDA Developers member izap.

In the video demonstration, a mystery person flicks through screens on a Samsung Galaxy S2, showing off distinctly Jelly Bean-like features. The device may also be running a little smoother than usual (Project Butter?), although it's almost impossible to tell, especially without a direct comparison.

The accompanying screenshot seemingly confirms 4.1.2 firmware running on a GT-I9100 device, although we can't guarantee it's legit at this stage.

That said, we wouldn't be surprised if the Galaxy S2 is included on the list of devices Samsung is bringing the JB update to - especially after a source 'confirmed' it would be getting it.

Although Samsung's 2011 flagship is still a damned good phone, it's definitely beginning to show its age, particularly when put up against its S3 successor and the likes of the Galaxy Note 2 and Google Nexus 4. Now more than ever, S2 owners need something to keep them feeling catered for by Samsung.