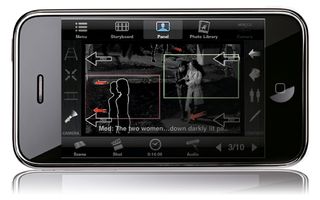 There are plenty of iPhone apps available for 3D artists

We've gathered together a collection of free and paid-for apps that can help you to work smarter and faster.

Even if you have resisted the allure of Apple's iPhone so far, the surprisingly large quantity of 3D apps out there may prove useful enough to make you look twice at the ubiquitous shiny fruit-marked touch-phone.

We've got offerings from the likes of software heavyweights such as Autodesk and Luxology, and a whole host from unknown developers. If there isn't something here to help you with design, workflow or even just that ever sought after inspiration, we'll eat Steve Jobs' hat.

Most of the links provided take you to the relevant product page in the App Store. Please note that you'll need to have iTunes 9.

There are lots of practical apps for the iPhone, iPod Touch and iPad, that could aid help your productivity, and there's plenty of eye-candy too

Take the technology that drives the Fluid Effects module in Maya and squeeze it into the iPhone: the result is Autodesk Fluid, a showcase for Maya's real-time fluid dynamics wizardry. Most people don't appreciate the perfectly simulated swirls of smoke that this Autodesk Fluid app is capable of displaying – because that's all it does. The graphics are a little rough around the edges, but there's some interaction to be had by adjusting the gravity or changing the colour palette. As a tech demo for those in the know, this app amazes. But judging by the one-star ratings in iTunes, most iPhone users have missed the point.

Animation Creator offers you a suite of sketching tools that enable you to draw and generate a short animated clip, frame by frame. The software supports frame positioning and rotation, zooming and panning, not to mention the useful onion-skinning feature (which gives you the ability to see the previous or next frame as a ghost image). At a push, it's an app that might prove useful for prototyping or pre-viz experimentation. Although the ability to add sound would have been a welcome feature.

Flipbook sells itself primarily as a mobile animation tool and the results (in the right hands) can be impressive. Head to flipbook.tv to find The Flea Cannon Catastrophe, a shining example of just how professional the app's animated content can be. For computer animators, Flipbook has some merit as a pocket pre-viz tool: you can sketch a sequence from scratch or import photos from your iPhone's photo library and trace over them. The toolset also includes an onion-skinning feature, which shows a ghost image of the next or previous frame. There's a free Lite version.

This exercise in offbeat, monochromatic animation wasn't in our original list – but it's been produced to such a professional standard that we'd argue it's still worth a look. Ported from the desktop version, For All Seasons applies various seasonal effects to a single page of black and white text and enables you to pan, zoom or rotate the view. For example, the Spring setting transforms the words on the page into blossoming vector flowers. The letters that form the words act as petals for each electronic flower and can be sent spinning into the air with a deft finger-flick.

Now you can explore the classic Mandelbrot and Julia sets on your iPhone, zooming in and in and in, admiring the repeating fractal structures and the extraordinary levels of vsual detail. Of course, iFractal isn't just about the mathematical artwork – nor is it about the various features, which include over 100 colour palettes, an animated zoom, screenshot capture (and export), plus a 3D view. It's also an amazing technology demo that shows just what Apple's hardware is capable of. The ability to share and explore the fractals created by the users of the app is a boon.

There's more to 3DVIA Mobile than dropping virtual sofas into a picture of your living room and uploading it to mydeco.com. The 3DVIA website encourages its community to create and upload their 3D models online. At the time of writing, there are over 20,000 models in the 3DVIA database and over 150,000 registered users. Need a render of an aircraft or a dog? You can then drop the models into your photos and share them. As an extension of the 3DVIA website, it's a must-have for community members. For everyone else, it's just a bit of fun.

Billed as delivering visual effects for the iPhone, this lightweight, novelty compositing tool comes with 50 free image cutouts that you can insert into your photos. All compositing is done with copies of your pictures, so your original photos remain untouched. CameraMagic Effects serves no serious purpose other than to fulfil the 'fun for five minutes' cliché. Despite having 33 different UFOs, miscellaneous cloud, smoke and fire effects, various aircraft, the space shuttle and several kinds of missile, it's unlikely to be the best 59p you'll ever spend.

Described as a portable visual synthesiser, Pulsar is a particle physics app that responds to the way you touch, swirl or flick the touchscreen. It's obviously pointless: an idle experiment with light, movement and colour that spits 57 varieties of sprite (from symbols to stars to fighter jets) across your mobile display. In terms of interactivity, you can adjust the on-screen effects using a selection of sliders. Gravity, explosiveness, sprite size, particle count and edge behaviour can all be modified, but this app's appeal quickly wanes.

This painting and drawing application can prove highly effective in the right hands. For starters, Sketchbook Mobile provides a fullscreen workspace, a 1,024 x 682 canvas and a 2,500% zoom for fine-detail work. If you're not impressed by its 25 brushes, colour swatches and colour wheel, the ability to work across up to six layers is bound to make you look twice. Touchscreen control will never be as fine as a graphics tablet, but that hardly matters; you can export your artwork as a PSD file and touch it up later. Test-drive the app by downloading the free version, Sketchbook Mobile Express.