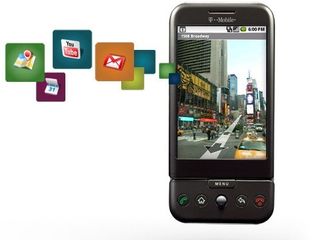 The T-Mobile G1 isn't an iPhone beater, but Android could be

So Android has arrived with the announcement of the T-Mobile G1. The HTC-manufactured phone certainly has a few nice touches, despite its lack of multi-touch (and with T-Mobile's particular variant, no accelerometer).

But while this particular handset might not be the technology king to beat the iPhone, the potential's there. And the OS looks super-hot. Here's why Android can make its presence felt and could really threaten the iPhone.

1. It's more open
Android is a fully open OS, which means that developing for it is a free-for-all. Handily, that'll mean more free apps and games than the iPhone's App Store can throw at us currently as they'll be offered by networks, content providers and Google alike.

2. It's got integration with online apps
Google is heavily involved here. We'll get better versions of handy stuff like Google Docs, Talk and Calendar plus Street View mapping on Android-based handsets. And it all comes with a single sign-on.

3. It's faster, faster, faster
One thing we've seen with Android all year is that it's incredibly fast. In the tech demo at last week's Google Developer Day and now we've got hands on with the G1, the interface doesn't suffer from the recent glitches the iPhone 2.0 firmware has.

4. Better hardware
The iPhone is high tech hardware, but it remains that phones with features such as MMS and better digital cameras appeal to the masses. Add in Android, and the iPhone will be playing catchup.

5. There'll be more variants
Apple has always been a bit one-size-fits-all. And the iPhone is no different in terms of the hardware (the capacity aside, of course). Android will be available in cheap mobiles as well as expensive ones, and that can only be a good thing.

6. It'll have Flash
So Steve Jobs reckons Flash is too intensive for mobile use? We don't think it'll be too long before somebody develops a version for Android. In the meantime, websites use Flash, Steve. Get over it.

7. It won't be restricted by Apple's nuances
Following on from number 6, many Android phones won't be locked down in the same way that the iPhone is (although how this plays out with networks remains to be seen). More flexibility could mean more fans.

8. You can have proper keyboards
We're pretty used to typing with the iPhone's keyboard now, but for many it's a step too far – and too small. The QWERTY slider keyboard on the T-Mobile G1 is the real deal.

9. It'll have better format support
Wider support for different formats will appeal to those frustrated by Apple's restricted model. And bring a whole load of new fans to Android.

10. You won't need to jailbreak
Hacking? It'll be expected with Android (though, once again, we don't know how this will play out with the networks). Customisation will be the norm, rather than the exception. Jailbreaking? What's the point?

11. Unrestricted apps
Apple has banned several apps from the App Store, including the Murderdome adult comic. You won't get so many restrictions with Android.