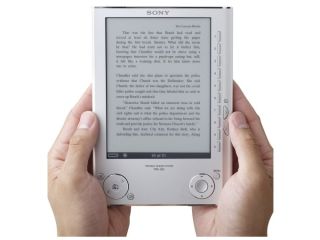 Saying the gadget will "revolutionise reading", Sony's spokesman declared: "What the Walkman did for music on the move, the Reader is about to do for books."

The 260g doohickey is based on the much-hyped eInk technology, which is a type of electronic paper involving tiny, charged microcapsules suspended in fluid.

So basically, the magnetic field either makes words appear or disappear depending on which way the colour flips. Clever, and also battery-saving, because the e-book only uses up battery power when the "page turns" (ie when the picture changes, and the particles move).

As a result, Sony says that the rechargeable battery can withstand 6,800 page turns per charge.

With a built-in memory capacity for 160 e-books off the bat, and the facility for 2GB or 8GB Memory Stick Duos, the Reader should have plenty of space for your favourite paperbacks. The 6-inch screen also boasts a viewing angle of "almost 180°".

Out tomorrow, the Reader will cost £200, which includes a bundled CD containing 100 "classic" (in other words, uncopyrighted) books. Read our initial thoughts.