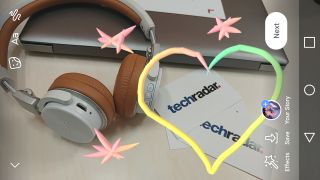 While Mark Zuckerberg faced a grilling from Congress about the use of millions of users' private information without consent, Facebook's developers were working on something rather more fun: augmented reality doodles.

The feature, which is rolling out over the coming days to those who haven't opted to delete their accounts, is integrated into the camera tool in Facebook stories.

While pointing your camera at an object, you can use your finger to draw color-shifting shapes on the screen with a 3D brush. You can then see them from different angles as you move your phone around and, with some careful manoeuvring, draw full 3D objects.

“We wanted to give people an easy way to create with augmented reality and draw in the world around them,” John Barnet, Facebook camera product manager, told TechCrunch.

It's a fun idea, though it works best if your phone has a stylus; drawing 3D objects that interact with the environment using your fingertip is awkward and the tool tends to lag ever so slightly, resulting in jagged lines.

It's also worth noting that you can't use your camera's flash while sketching in 3D (which is understandable, because it would interfere with the lighting on your creations).

Facebook Stories has also borrowed Instagram's Boomerang feature, enabling you to create endlessly looping animations from snippets of video. Facebook's Camera tool already had something similar but Boomerang is more refined and gives better results. Look out for this appearing at the same time as the doodles (and possibly more apologies from Zuckerberg).