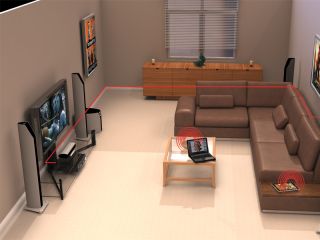 Discs are so yesterday. They get damaged, they get lost, they won't work with all your equipment and they need a player in every room.

For a long time, moving a whole media collection onto a central server has been the dream of many. But potential problems, including the inevitable mess of cables, complex switch configuration and living with a noisy PC next to the telly, have put some people off.

Forget all that negativity. It's now possible to build a discreet, powerful system that will neither cost the Earth, nor need your family's approval for cable tethering. Best of all, you won't need to make compromises for quality.

Networks and hardware are now easily capable of streaming high-definition 1080p content. You probably already have the streaming client sitting underneath your television, or in the palm of your hand. Whether that's a PlayStation 3, a Nintendo Wii, an Android phone or an iPhone, linking all these devices together to create a home mesh of media is a great solution for people with large media collections – or children with sticky fingers.

If you're after the perfect living room experience, you can now buy devices that will grab data from numerous sources and push it through an HDMI cable straight to your television. The trick is knowing what goes where.

We're going to move from room to room, building the perfect solution for your home. We'll travel from the study, with its loading bay PC, to the modem and router in the hall, past the stairs with their hidden NAS box and on to the living room, where you'll be able to enjoy the fruits of all your hard work: lag- and stutter-free access to your entire media collection from the comfort of your sofa.

This is where your content metamorphoses from a physical liability into a series of files sitting on a network-attached storage box hidden under the stairs. This transformation must happen within a PC, because it involves a lot of number crunching to sort everything out neatly.

Whether you're turning an audio CD into MP3 and FLAC files, or transcoding a home movie into high-definition MKV, the more raw processing power you have, the less time you'll need to spend acting as disc-tray nanny.

As a result, the study needs to house an all-powerful computer. It's going to run Windows 7, and it will need to be as brawny and power-efficient as possible, switching into a low-power standby mode when not in use and enabling network devices to have the on-demand option of using it for transcoding one video format to another, if the need arises.

The CPU needs to be of the full-fat variety, with as many cores as you can reasonably afford. AMD processors are currently top of the pile when it comes to price and performance, but we've found that Intel CPUs are generally better behaved, suspend easier and use less power.

For that reason, we'd recommend opting for a Core i7 model with as much speed and as many cores as you can happily pay for. The Core i7-875k is a good choice in this instance, because it balances this performance with relatively decent value now that its price has dipped below £300.

You'll need to combine this with plenty of memory, because video compression and transcoding will eat as much as you can throw at them. Consider 4GB of fast RAM as an absolute minimum.

If you're intending to record live television, you'll also need room for the Freeview card and plenty of hard drive space – although your NAS is going to be the archive for your data, so space on the PC is only going to be needed temporarily.

You might think you can skip the expensive 3D graphics card in favour of a machine that's meant only for 2D video, but there's an interesting technology that might make you reconsider.

The GPU within a 3D graphics card is itself a powerful number cruncher, and manufacturers are just starting to catch on to the idea that a GPU can be harnessed for desktop applications as well as gaming.

Nvidia, for example, has created a technology called CUDA, which will enable developers to use the power of your GPU to accelerate mathematically intensive processes – which is exactly what video encoding is.

Nero's Move It software encoder can use CUDA for video conversion, and Daniusoft's DVD Ripper claims that CUDA helps it attain a 500 per cent conversion speed. For this reason, it's worth trading some of your CPU budget for a decent Nvidia card.

The EVGA GeForce GTX 460, at less than £150, is an excellent choice for GPU acceleration.

To complete the PC, you'll need decent networking provision. Your PC is going to be both the encoder and the transcoder, constantly shuttling data across the network, so the only realistic options for connectivity are physical – either with an Ethernet cable between this machine and the router, or a Powerline unit to pass the Ethernet through your home's power grid.

Wireless is fast enough in theory, but not in practice – especially when slower devices are also connected or other people are consuming the bandwidth. We recommend a wired Powerline backbone for data streaming, and because nearly all motherboards include Gigabit Ethernet, this is all you're going to need here.

Finally, with the system configured and Windows 7 installed, you'll need some software to perform the transcoding magic. This will help platforms such as Nintendo's Wii and Apple's iPad access your entire media collection without the media being encoded into the formats those devices specifically support.

The best we've found is TVersity, which can cater for a vast number of players and understand almost any media format you throw at it. The basic version is free, and it's easily installed, automatically detecting all your media files stored locally. For remote files held on your NAS, you'll need to mount the remotely shared folder onto your system and make sure this mount point is connected each time your computer boots.

If you want to access your media collection from the internet, try downloading Orb. This uses a web portal to stream your media from your PC to any compatible and connected device on the web – the only limit being the upload speed of your home connection.

Current page: How to build the ultimate home media network