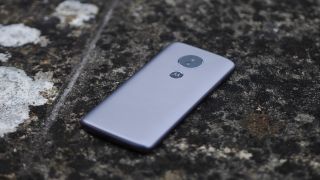 The Moto E5 launched back in April 2018, so we’re due a new model, and it seems the Moto E6 could be almost here, as a detailed render of it has just leaked.

Shared by Evan Blass (a reliable leaker), the Moto E6 as shown here is a distinctly budget-looking handset, as you’d expect. It has a big bezel surrounding the screen, a patterned seemingly-plastic build, a 3.5mm headphone port, and single-lens cameras on both the front and the back.

From the front it’s similar to the Moto E5, but from the back it’s quite different, as the camera block on the Moto E6 as shown here is smaller and in the top left corner, while on the Moto E5 it’s more central.

There’s also a fingerprint scanner on the back of the Moto E5, whereas there’s no obvious sign of one on the Moto E6 – and on a model this low-end, it likely won’t be built into the screen.

That might mean the Moto E6 is a downgrade in one way, and if an earlier specs leak is to be believed its screen could also be a downgrade, at least in size, apparently coming in at 5.45 inches and 720 x 1440, whereas the Moto E5 has a 5.7-inch screen of that resolution. The same source points to a Snapdragon 430 chipset in the E6 though, which would make for a slight power boost.

However, the best bit of the Moto E range is typically the battery, and there’s no word on what size that is yet. That, along with the cost, could make or break this phone. We’d expect we’ll learn more about it soon, so stay tuned.