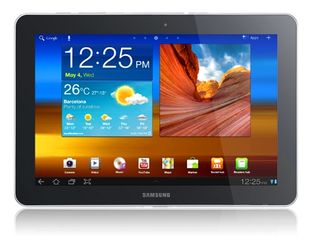 'But Your Honour, how could we have stolen this idea from Apple when it wasn't even its idea?'

The epic patent infringement battle between Apple and Samsung, has taken a bizarre twist with Sammy claiming that tablets like the iPad were actually the brainchild of film director Stanley Kubrick.

Apple has argued for months that Samsung's Galaxy Tab 10.1 'blatantly copied' the iPad 2 and briefly had the rival device banned across Europe.

However, Samsung will now tell the courts that because a similar tablet actually appeared in Kubrick's 1968 film 2001: A Space Odyssey (see below) it makes Apple's patent null and void.

Samsung says Kubrick's future-thinking movie opens up the 'prior art' defense, which can be used to invalidate patents if the idea can be proved to have existed before the patent was issued.

The filing reads: "Attached hereto as Exhibit D is a true and correct copy of a still image taken from Stanley Kubrick's 1968 film 2001: A Space Odyssey. In a clip from that film lasting about one minute, two astronauts are eating and at the same time using personal tablet computers.

As with the design claimed by the D'889 Patent, the tablet disclosed in the clip has an overall rectangular shape with a dominant display screen, narrow borders, a predominately flat front surface, a flat back surface (which is evident because the tablets are lying flat on the table's surface), and a thin form factor."

Effectively, Samsung is saying it is Apple who should be in the dock for stealing ideas because Stanley Kubrick thought of the iPad some forty years before Steve Jobs showed his tablet off to the world.

The man who discovered Samsung's filing to the California court, Florian Mueller, doesn't hold out much hope for Samsung's claim, but you have to give the Koreans credit for this maneuver.