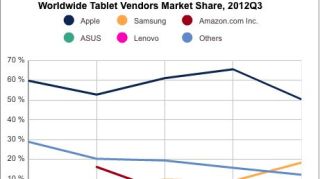 The tablet market grew by more than a bump between the second and third quarter of 2012, according to recent data gathered by the International Data Corporation (IDC).

The gloomy take on Apple's past quarter didn't let up, as the IDC reported the company's total market share dropped from 65.5 percent in Q2 to 50.4 percent in Q3.

"After a very strong second quarter, Apple saw growth slow as both consumer and commercial (including education) shipments declined, and rumors of a forthcoming iPad mini began to heat up," said Tom Mainelli, research director for Tablets at IDC.

Consumers interested in slates made by Apple likely sat the quarter out, Mainelli noted, though the fourth quarter will be "very good" for Cupertino thanks to the iPad mini and iPad 4.

The mini, however, has its own hang-ups.

"[We] believe the mini's relatively high $329 (UK£269, AUD$369) starting price leaves plenty of room for Android vendors to build upon the success they achieved in the third quarter."

Apple reported Monday it sold three million new iPads over the last three days, though the exact breakdown of how many of each left store shelves remains unclear.

Amazon, Asus and Lenovo all saw growth over the year, the IDC chirped, helping the three companies round out the top five market holders.

Amazon, maker of the "worldwide bestseller" Kindle Fire HD, jumped from 4.8 percent in the second quarter to 9 percent in Q3.

The leap is even more impressive since Amazon only shipped the tablet (in both 7- and 8.9-inch variants) to the U.S., though it started sending it to five more countries in Q4.

While the other top tablet makers gobbled up a bigger slice of the market from Apple, Samsung stole the spotlight with shipments totaling 5.1 million worldwide, up 115 percent from Q2.

That amounts to a 325 percent increase year over year.

Its global market share for Q3 stood at 18.4 percent, allowing it to surface as the clear quarter victor.

"The company offers a wide range of tablet offerings across multiple screen sizes and colors, and that clearly resonated with more buyers this quarter.

Its growth to 18.4 percent of worldwide market share during the quarter represents the first time a competitor has attained this level of share since the original launch of the iPad."

How the newly announced Nexus 10 impacts Samsung's growth (and Apple's tablet dominance) moving deeper into the holiday quarter will be worth a watch.

Apple, the IDC warned, better watch out as even Windows 8 and Windows RT tablets by Microsoft, though pricey, will give the firm a run for its money.

"Competitors are turning up the pressure on market leader Apple," Reith said.