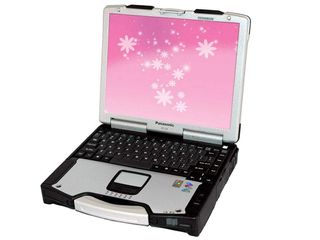 As expected, Intel's new Atom CPUs have recently been turning up in mini PCs almost faster than we can count them in. The latest, which will be announced tomorrow by Panasonic, is one of the more unusual variations.

Panasonic's well-respected Toughbook series of laptops and tablets will be joined by an as-yet-unnamed smaller brother, probably powered by a 1.33GHz Atom and weighing around 900g.

After talking with Panasonic ahead of the launch, we can confirm that it will be a hybrid device, with a tiny 5.6-inch touch-sensitive display, as well as thumb-style keyboard.

In common with the rest of the Toughbook models, it will also be drop-resistant and won't mind a splash of water or dust, thanks to its rubber-sealed ports.

We'll bring you more on what sounds like the most innovative application of Atom yet once it's official, including news on a European release and pricing information.

We may even get one to play with on your behalf but that's a secret for now, so shh. Oops.