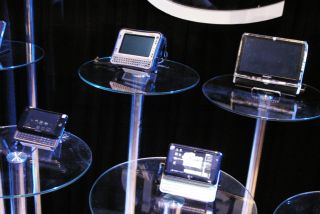 After last month's Atom branding launch, Intel has revealed full pricing and specifications for its new ultra-mobile x86 processor. Showcasing the new chip at the Intel Developer Conference (IDF) in Shanghai, Intel also gave a sneak peak of how Atom will perform.

Previously known under the Silverthorne codename, five versions of Atom will initially be targeted at the so-called MID (mobile internet device) form factor. Clock speeds range from 800MHz to 1.86GHz. Bus frequencies start at 400MHz and top out at 533MHz.

As for power consumption, the slowest 800MHz model is rated at just 80mW idle power and 0.65W peak. The rest of the new family share a 100mW idle rating, and range from 2W to 2.4W peak.

Volume pricing for the entry-level Atom Z500 chip kicks off at $45 while the top 1.86GHz Z540 model weighs in at an extremely hefty $160. That's comparable to an Intel Core 2 Duo chip running around 2GHz.

So, we now have a pretty good idea of the cut of Atom's jib. We know how fast it will run, how big it is, what it costs and what makes it tick. But what about the minor matter of how it actually performs?

Well, the full story of Atom's performance is not yet known. Predictably, Intel claims that Atom beats seven shades out of the Arm-based chips that are found in many existing mobile digital devices (including the iPhone). If Intel's claims are to be believed, a 1.6GHz Atom is around 13 times more powerful than a 400MHz Arm chip.

But how does Atom compare to Intel's own PC processors? Intel demonstrated the same 1.6GHz Atom completing the Cinebench9 rendering test in approximately two minutes. That compares with around 35 seconds for the likes of a 2GHz Core 2 Duo processor.

Needless to say, Intel's high-end quad-core processors slash that to mere 10s of seconds. Intel also said the integrated GPU found in the accompanying Poulsbo chipset is capable of pumping out 400m pixels per second. Sounds impressive, but it's a tiny, tiny fraction of what a powerful desktop graphics chip is capable of.

So, Atom is no powerhouse by PC standards. But is it fit for purpose? Perusing the various engineering samples of MIDs and other Atom-based systems on show at IDF, the chip certainly delivers a responsive experience when running the likes of Windows XP and Linux.

But the bloatfest that is Windows Vista appears to be more than it can handle. The Vista-powered Atom systems are frankly sluggish.

Intel says it's shipping Atom processors to customers now. The first Atom-powered devices are scheduled to go on sale within 60 days.