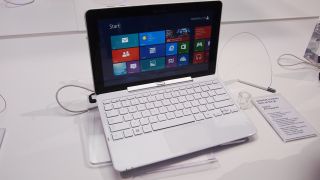 Samsung and Microsoft get smart

Samsung and Microsoft are about to approach a significant figure for the year, at least according to a South Korean VP.

Jin Park, vice president of IT solutions business at Samsung, said the company will ship 16 million tablets and laptops with Windows 8 and Windows 7 this year.

The report comes from Reuters and while the figures represent some nice hardware sales for the South Korean firm, Microsoft can certainly give itself kudos for its OSes.

TechRadar asked both Samsung and Microsoft for each companies' take on the figures, and we'll update this story as soon as we hear back.

Of particular interest is what the shipments mean for Microsoft as the newer Windows 8 has reportedly been slow off the starting blocks.

It only hit the market at the end of October, but according to a web analytics firm, Windows 8 Touch has managed to capture a meager 0.02 percent of the tablet market so far. Windows 8 RT Touch has, by the numbers, taken zero percent.

How much Samsung products like the Ativ Smart PC help the OS's sluggish start remains to be seen, but it's got to be better than how the Surface is reportedly faring.