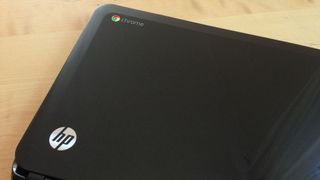 After Microsoft COO Kevin Turner hinted at the existence of some cheap-as-Chromebooks Windows 8.1 laptops, new details of such a device have arisen.

Other rumored specs suggest this affordable machine would come built on an AMD processor, 2GB RAM and 32GB of on-board storage, likely in the form of a solid-state drive.

That's just enough storage to install and run Windows 8.1 and still have room for a few applications, but on the bright side users will also purportedly receive two free years of cloud storage on Microsoft's OneDrive service.

New HP Stream 14 users can supposedly expect a 720p webcam for video calls, a Beats Audio system and an HDMI-out port, too.

Dogfighting in the Cloud

The only knock against the HP Stream 14 is it basically resembles the company's 14-inch Chromebook. The Stream 14 will also reportedly be available in multiple colors, much like the Chrome OS-based laptop.

Laptop makers will occasionally reuse their own chassis for multiple machines, but we'll take this and other details about the HP Stream with a grain of salt.

Spec-wise though the HP Stream 14 sounds completely in line with the budget Windows machines Turner talked up at the company's Worldwide Partner Conference on July 14.

Like the Toshiba 11.6, the Stream 14 is said to come with just 32GB of storage. It seems that Microsoft is putting a lot of faith into its cloud solutions, such as Office 365 and OneDrive, to make these budget Windows machines a hit.

Come this holiday season we could see Microsoft go toe-to-toe with Google in a turf war for affordable laptops and cloud-based ecosystems.