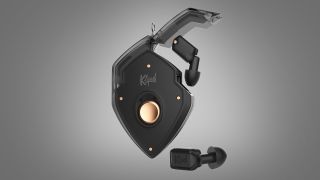 US audio brand Klipsch is set to launch three new pairs of true wireless earbuds at CES 2020 in Las Vegas, which kicks off on January 7.

According to Engadget, both the T10 and T5 True Wireless ANC earbuds come with built-in "AI, gesture controls, and active noise cancellation," though details about the artificial intelligence technology on offer are scant.

Klipsch says that the earbuds will have "a built-in operating system with embedded artificial intelligence", which could allow you to control your music playback using your voice, without the need for a third-party voice assistant like Google Assistant or Alexa to be installed on your smartphone.

Judging from the limited press images we have, the new Klipsch T10 True Wireless earbuds appear to have a hinged design, separating the eartip from the body of the earbud – this could offer an enhanced fit compared to models like the Sony WF-1000XM3 or the Apple AirPods.

They also come with a uniquely-designed hexagonal charging case, which features different lids for each bud and an attractive rose gold and black color scheme.

Right now, we don't have any imagery for the T5 True Wireless ANC earbuds, but we're expecting them to sport a similar design to the original T5s, with a Zippo lighter-style charging case.

Klipsch hasn't provided any information on the audio quality offered by these new buds, so we will have to check that out for ourselves at CES 2020, where we'll be on the ground reporting on all the latest releases from the tech show.

What we do know about these buds, is the price; according to Engadget, the T10 True Wireless earbuds will be available to buy between September and November 2020 for an eye-watering $649 (yes, you read that correctly).

That works out at around £490 / AU$930 based on current conversion rates, and far surpasses the cost of any of the buds on our best true wireless earbuds list – whether the inclusion of built-in AI will justify that extraordinarily high price remains to be seen.

One for the runners

According to the company the buds will come with a dustproof and waterproof charging case, while the buds themselves sport an IP67 rating. Three sizes of ear wings means that you should be able to find a secure fit while working out.

Finally, Klipsch is bringing out a second generation version of its true wireless earbuds; the T5 II True Wireless earphones come with a new earbud and eartip design and a new Bluetooth antenna – although battery life will remain the same at 24 hours.

As well as the new true wireless models, Klipsch is set to launch it's first wireless over-ear noise-cancelling headphones at CES this year.