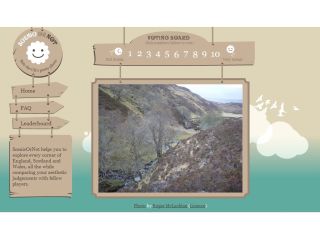 Many an internet user has had their vanity bubble burst by rating sites on the internet, but now it's time for the UK and Ireland to be scrutinised visually.

New website ScenicOrNot is relying on the general public to find the best-looking sites in Great Britain.

Users are asked to give images a 1-10 rating, with each photo representing 1km of land in the UK. There are over 200,000 images in a database, with both rural and urban locations catered for.

According to its makers Mysociety, the website will give users a random picture of the UK, so there can't be any sort of favouritism in the way you rate the images.

Although the site is for fun, Tom Steinberg Director of Mysociety, explained to BBC4's PM programme that the data will be used for something more serious in the future, but refrained from explaining what.

He did point out that the data gathered would be "open so that anyone can re-use it and play with it later on".

It's not just the folks behind ScenicOrNot who is turning landscapes into a popularity contest.

Wired UK is reporting on a project by Cornell University, which is aggregating the world's most-popular photographic sites.

Using geo-tagged images from Flickr.com, the team has created a map of the world, pointing out the popular photographic spots.

"We can discover, through collective behaviour, what people consider to be the most significant landmarks both in the world and within specific cities," explained the uni researchers to Wired UK.

So far 35 million images from Flickr have been collated over a six-month period, with New York coming out on top as 'the most photographed city' and the Trafalgar Square noted as the most popular London picture destination for Flickr users.

Via BBC and Wired UK