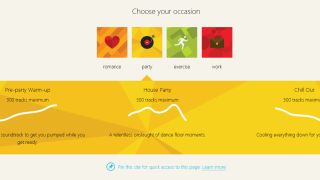 MixShape shows a graphically representation of your songs

The universal language of the mixtape is still alive and well in the age of Spotify and other streaming services. That's according to DJ and UNKLE founder James Lavelle who believes that digital music hasn't changed how we love music.

Lavelle spoke to TechRadar about the launch of Microsoft's new MixShape service, which can reshape or extend your playlists according to what you'll be doing, whether that's having a party or spending the day at work.

"The mixtape thing is a language that's [still] very relevant now," said Lavelle. "Having all the formats change, the thing that has stayed the same is the communication of how music is given to each other, whether it's on cassette, CD or now as whatever playlist you have whether it's iTunes or Spotify.

"It's how we discover music, especially when we're young. I think it's really important, that whole process of showing what you're into, who's cool."

Lavelle was asked to compile playlists for four categories on the Mixshape service: exercise, work, party and romance. "I love that in a 12 hour set you can have everything from James Brown classic disco to techno records…in clubs where something can be really underground but you hear Stevie Wonder or Jackson 5 in the middle of it.

"What I tried to do with each of the genres [was be broad]. When I was asked to do it they said all I had to do was an hour for each section, but you start getting into it and feel that when you're treading a certain line you've got to keep going. Once you have the three best soul records [is that enough]? It's got a lot bigger which for me is really great fun. For hours and hours I've just been immersed in music. [Finding] forgotten records which you then rediscover."

Lavelle believes that Spotify's suggestions are "very, very good". T's quite brilliant in a general way what they have. Like anything the content could be better Once you start losing things like The Beatles and Led Zeppelin and that side of things…, but surprisingly it was a lot better than I thought. If you start to get very trainspottery about certain genres of music, like electronic music. The 90s is pretty good, but there's quite a lot that's been lost. But then again, there was a lot of stuff I was shocked was there. So I'd say I've got 90 per cent of what I wanted. I've tried to create something that's eclectic, that will appeal to the widest variety of people.

"The work one for me is something I'd personally program, as it's more like a soundtrack to your day– not in an overly thought-out kind of way but more in a put your headphones on and go on a trip [way]. The others may work better programmed. I think it's important that things are spread out as some artists have more songs in there than others. And so it's partly my taste. There's 1000 songs on there, so there's quite a lot to choose from.

"I hope it will create some discovery for people, a bit of fun, a few memories – especially if you came to a club with me there 20 years ago but equally if you went somewhere with Giles Peterson 25 or 30 years ago. I hope [it would also appeal to] my 15 year old daughter."