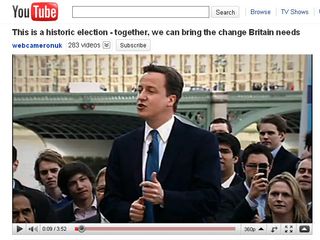 The internet has become the last battleground for the UK's main political parties, with the Conservative's buying up a homepage advert on YouTube at a huge cost to the campaign.

The video advert is of a speech given by David Cameron titled: "This is a historic election - together, we can bring the change Britain needs".

The Telegraph is reporting that the advert could have cost the Conservative's in the region of £100,000, while the amount of people who will see the advert runs into the millions.

Unfortunately for Cameron and his Tory troupe, there seems to be a bit of democracy in action on the video's comments page.

If you click into the video, you can see that the comments range from the funny to rather abusive – typical for YouTube.

Some of the ones we can actually publish are from SnapeHermione: "at least gordon brown will fight for the working and middle class, unlike that posh git"; and Sixthsense1990: "If this slimy, posh little sod ends up in Number 10, the country is doomed. Nick Clegg or Gordon Brown can change the country, this man can't".

Meanwhile, in Facebook towers the social-networking giant is trying to recover from its privacy gaffe by adding an 'I voted' button to the site, alongside a ticker clock of all those who have announced they have voted.

As you would have guessed, Twitter is ablaze with political chatter and its trending topics show this.

Instead of UK Vote being the top topic in the UK, though, as this article is published original suffragette Emmeline Pankhurst is top, followed by Monster Raving Loony.

When it comes to how savvy the nation's politicians are on the internet, however, it seems that Nick Clegg wins this due to the fact that he is the only one to own his own .com domain name.

Domain name specialists Sedo notes that www.gordonbrown.com and www.davidcameron.com are unofficial blogs, while www.nickclegg.com leads you to the Liberal Democrat's homepage.