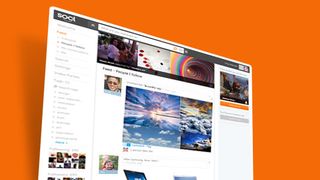 Microsoft opened the floodgates on its search-based social network SoCl, putting the project in public beta.

While there was an open soft launch back in May, SoCl was redesigned and re-launched for a more public debut.

The redesigned SoCl features a feed of posts from all users as its home screen, pulling random posts from across the social network in an endlessly scrolling page.

Typing any search term into the SoCl navigation bar creates a post, which users can populate with image, video, and link search results pulled from Bing.

A picture is worth thousand views

Images are by far the dominant form of expression on SoCl, filling the screen with image posts ranging from snow Bengal tigers to artesian breads.

SoCl is the product of Microsoft's FuSE Labs, designed originally to help students connect for collaborative learning. However, Microsoft altered its focus as the SoCl beta community developed, resulting in the new design aimed at searching for and sharing broader interests.

By Microsoft's own admission, SoCl is considered an "experimental research project," so it's possible that SoCl may never leave beta to become a commercial social networking site.

Instead, SoCl has placed its focus on allowing users to share "rich post collages." Currently, that amounts to a mishmash of random image galleries, but perhaps now that SoCl is open to the public it will carve out a niche of its own.