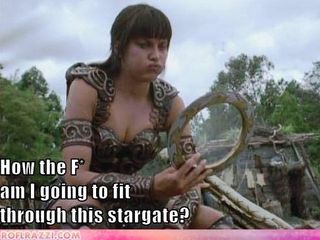 First there was Lolcats, then the Loldogs, and now meet Roflrazzi – another ridiculously-named site asking for you to amusingly caption the pictures.

Roflrazzi is the brainchild of the people behind icanhascheezburger.com (Lolcats) and ihasahotdog.com, so expect it to be hitting a Digg near you soon.

Instead of furry things, Roflrazzi deals with celebrities, and the likes of Chuck Norris and William Shatner are already seeing their cult status make them high profile 'captionees'.

It's not yet as charmingly amusing as its fluffy predecessors so it remains to be seen if it will become a cult hit in its own right – but in the meantime keep an eye out for all your favourite 80s' stars as they dominate the site.

Lolcats became such a phenomenon that it was covered by Time magazine, which suggested the site has a 'distinctly old-school, early 1990s, Usenet feel' to it.

The format is believed to have originated in messageboards in 2005, but hit the big time with icanhascheezburger, which launched in January 2007.