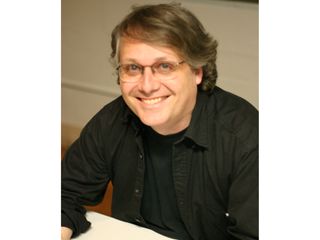 Scott McCloud tells us more about Google Chrome, as well as his own plans for the future

One of the coolest things about Google's surprise launch of its Chrome web browser this week was the use of Scott McCloud's explanatory comic book.

TechRadar spoke with the author of such modern classics as Zot! and Destroy!!! this week who told us a little more about the background to the project, along with hinting at what he plans to work on next.

Who wrote the Chrome comic?

McCloud reveals that he wrote the script for the Google Chrome comic, "though of course the words are the engineers' words… [but] they've been condensed considerably and edited for grammar and readability.

"I was given a lot of latitude... on my end, to find an organic, fairly natural flow of ideas," McCloud adds, noting that because the project was top secret, none of the work could be 'farmed out'. Amazingly, the project has taken him '4 or 5 months or so', so Google has done a pretty good job of keeping mum on Chrome over that period.

One of the greatest achievements McCloud has made with the Google Chrome comic is to explain difficult, highly technical ideas to the layman.

"You know it's funny," McCloud told us, "a couple of the most difficult ideas wound up actually being esoteric enough that we all agreed at the end that they probably didn't belong."

"I came up with a visual explanation, for example, of the proxy and stub protocol for getting plug-ins to talk to the renderer at a distance, which in the end just seemed unnecessarily technical, but I was very proud of the diagram. I was sad to let it go! Although I agreed that it probably needed to go in the end – it wasn't necessary."

McCloud adds that, "as a trial for future endeavours I think it's interesting that as technical as this book was, it could have been more technical, and still been readable. I think that's what we learned in the course of making it…I don't think we've really scratched the surface of what it can do.."

"The general impression of Google, I think, is largely correct," says McCloud. "It does seem to still have a casual but efficient air. It didn't strike me as frivolous, but I think its reputation of being an engineering-driven company where the creative minds are the engine that runs everything – I think that that reputation is well-deserved."

Read the full interview on TechRadar to find out more about Google Chrome, his opinions on Google's laid back, freewheelin' work culture and the latest on McCloud's own plans for the future.