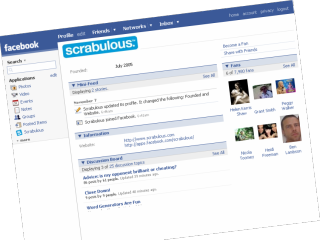 Facebook has been asked by the makers of Scrabble to remove the third-party application 'Scrabulous' from its site. It's an app which enables Facebook friends to play games of scrabble amongst themselves.

But Scrabble's owners, Hasbro and Mattel, say that Scrabulous infringes upon their copyright and want it removed from Facebook completely.

Scrabulous is one of the most popular applications on Facebook, and so any decision to scrap it will likely be met with much resistance from users of the site.

Facebook opened its borders to third-party applications in 2007, paving the way for amateur programmers to create their own mini-apps for people to fool around with.

These apps have caused a lot of controversy though, with many people complaining that they have made Facebook too busy and take away from the site's original appeal.

We've had hundreds of emails about Facebook in the last few months, with many saying that the applications are forcing them to abandon Facebook altogether. Ironically, Scrabulous is one of the only apps that has won universal approval.

Sue from Australia wrote in and said: "Just read your interesting comments on Facebook, agree with you about most of the silly applications, I have dozens, thanks to my daughter.

"I don't bother with them - I don't even feed my rabbit! Will get rid of them - There is one however that I love - it is Scrabulous, you can choose your speed and spend as much time as you like. I usually have a few games going at once. You can chat to your opponent whilst playing if you wish, and get to know them a little."

Scrabulous gets nearly 600,000 people logging in every day, and a 'Save Scrabulous' Facebook group has already accumulated over 1,450 members.

It seems as though Facebook will either need to dig into its pockets, or see Scrabulous disappear from its site forever. Microsoft recently bought a 1.6 per cent stake in Facebook for £117m so the site isn't short of a little cash.