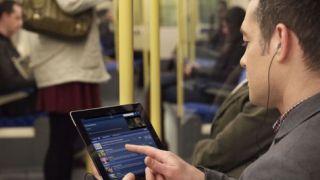 Best streaming services to keep you sane this Christmas

Christmas is, as we're always told, all about family - but for those of us that like a bit of a break from boardgames and grandad's tall tales it is also the season for subscribing to a new streaming service.

The good news is that there is no shortage of wonderful candidates offering up a wealth of premium options from music and live sport right the way through movies and TV boxsets.

So whether you're looking for Sopranos or Spurs, let TechRadar guide you through the big players.

Music streaming has quickly become a tour de force in the industry, with a whole generation perfectly happy not to clog up their lives with CDs or vinyl, or limit themselves to just the albums and singles they've bought. The whole concept of ownership may be a little skewed, but when you can listen to the latest tracks without having to commit more than about an album worth of hard cash each month, the attraction is easy to see.

Spotify has established itself as a global player in music streaming, especially in its native Europe, and a huge catalogue and relatively intuitive user interface across apps and web explain why. Premium subscribers can 'cache' music on their devices so you can listen even without an internet connection, and there is something rather wonderful about listening to Bing Crosby's Christmas hits without having to pay for a CD that you'll play once a year.

Tidal is quickly earning itself a big following by offering a much higher quality listening experience than its competitors. Audiophiles who are tempted by glorious lossless sound quality need to balance that against the £20 cost and a smaller catalogue.

It was inevitable that one of the big guns would become a major player in streaming music, and Google has leveraged its powerful Android and YouTube audiences to offer up an increasingly impressive service at the same price as Spotify. Signing up now brings not only Google Play Music Unlimited but also YouTube Music Key and another big catalogue as part of the bundle.

If you're looking for something a little different from the norm, Deezer has been an established force in the sector for years and offers up a big catalogue and a different take on discovering just what you should be listening to if your hipster mates don't manage to keep you current enough.

Streaming and caching video of all niches to your phone is not only useful but increasingly competitive with the big daddy television services. Netflix and Amazon are becoming content makers of considerable substance and Sky's UK services are an increasingly powerful proposition.

Netflix has become a household name in streaming TV with a relentless marketing campaign and an increasingly powerful raft of original content including smash hits like House of Cards and Orange is the New Black. Like most of its competitors, the movie catalogue has some gaping holes (especially if you are looking for recent blockbusters) but also a bunch of films you'll be champing at the bit to see again.

Sky Go is a free service for Sky subscribers allowing you to stream shows to a device, and for a little extra cash you can make this a download service, Sky Go Extra, which gives you a whole host of movies and TV shows for offline playback. When it was announced, there was a huge slice of annoyance that this cost an extra fee. However, once you step away from that ire it's clear that this is a no-brainer for commuters, heavy travellers and those who fear their in-laws' internet connection may not be all that robust.

Also from Sky's stable is the impressive Now TV, bringing access to premium sport, movies and TV without all that satellite dish nonsense. You can subscribe to monthly, weekly or daily content packages - which allows you to scale to your budget - and you'll be able to access some brand new movies, epic box sets and, of course, that all important Premier League football depending on what package you pick.

Amazon snapped up old streaming warhorse Lovefilm and slowly evolved it into a Prime Instant Video service. It's a big slice of value for those that have signed up for the Prime service - which also adds in free and fast delivery on a lot of items - not least because it is competing with Netflix to bring its own exclusive shows. Recent highlights include Extant with Halle Berry, but the most fun is trying to spot the gems in its pilot shows each year. Again, there's a big movie package but it's hit and miss.