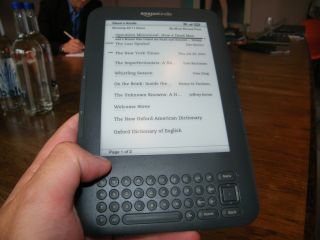 Kindle gets its own UK store

Amazon has announced the arrival of its Kindle store, bringing thousands of ebooks to the UK.

Amazon revealed last week it was introducing the Kindle to the UK for the first time, with a 3G and Wi-Fi version penned in for a September release.

The opening of the UK store means that users will be able to buy their bestsellers in pounds and pence, rather than logging onto the US version of the site to get content.

Amazon is boasting that there are 400,000 ebooks available on the site and these include 84 out of the 100 bestsellers in the UK.

Now that the store is open, you can actually pre-order your device and purchase media for it now, so it is there for you when the Kindle actually arrives.

As with the US store the ebooks on offer aren't just exclusive to Kindle users, they can be viewed on all manner of devices – including iPad, iPod touch, iPhone, Mac, PC, and those packing Android.

The Kindle UK release date is September and will be priced from £109.

Check out the store now at www.amazon.co.uk/kindlestore.