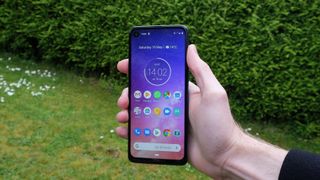 We've heard rumors about a new Motorola phone on its way, called the Motorola One Macro, but newly leaked renders of the smartphone suggest it's not as much of a successor to the impressive Motorola One Vision or One Action as we'd hoped.

These images come from Saudi retailer Extra, which briefly posted a listing for the upcoming smartphone. This entry was quickly deleted, but not before GSMArena could grab a screenshot of the listing.

We'd previously heard a few pieces of information about the Motorola One Macro: it's said to have relatively weak processing power, with low benchmark scores and a mid-range chipset, but a fairly decent 4,000mAh battery.

The titular feature is that the One Macro is set to have a macro lens, a camera lens used to take close-up pictures well, and in total the smartphone apparently has four lenses, which is the same number as the Motorola One Zoom.

Between the impressive features (the camera and battery) and the... well, not so impressive aspects (the weak performance), it wasn't exactly clear what the Motorola One Macro would be like. However the new renders suggest it will be at the affordable end of the Motorola One range, thanks to a few specific features.

Judging a phone by its cover

The Motorola One Macro looks set to have a 'teardrop' notch to house the front-facing camera, which intrudes on the screen. This is seen as a feature of more affordable smartphones, especially compared to the 'punch-hole' camera placement used in most of the other Motorola One smartphones.

There's also a rear-mounted fingerprint sensor, while recent Motorola One smartphones like the Zoom have used in-screen sensors, which are a more 'premium' handset feature.

We'd also argue that the camera placement feels a little tacky – instead of having one camera bump, like all the other Motorola One smartphones (and basically all smartphones ever), there are two. One of these houses the main sensor, and the lower one collects the others. This makes it seem as though the extra lenses are tacked on, which doesn't look amazing.

With these particular design features in mind, we'd imagine the Motorola One Macro is a rather low-end (and therefore affordable) Moto phone. However take this leak with a pinch of salt, as not all pre-announcement information turns out to be correct.

Now that we have an idea of the design, and some of the specs, of the Motorola One Macro, we may be officially seeing it rather soon. Stay tuned to TechRadar, as we'll report on the Macro as soon as we get our hands (or eyes) on it.