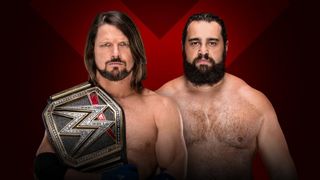 The pay-per-view event is scheduled to begin at 7pm ET (4pm PT, midnight BST, 9am AEST Monday morning) though wrestling fans that want to catch all the action should tune in an hour earlier to catch the kickoff show before the Extreme Rules main event.

WWE Extreme Rules 2018 will be the last stop on the road to SummerSlam and wrestling fans that prefer non-traditional matches where anything can happen are in for quite the show. Not only will there be cage matches but chairs, sticks and other non-conventional weapons will also be allowed as Sunday’s WWE Extreme Rules pay-per-view event is the spiritual successor to the now defunct ECW.

There are eleven matches on Sunday’s card and the three-and-a-half hour show will feature a Steel Cage match, a tables match and James Ellsworth will even be suspended above the ring in a shark cage when Alexa Bliss takes on Nia Jax for the Raw Women’s Championship.

Unfortunately due to a 30-day suspension, Ronda Rousey will not be in the ring but she will be in the crowd. Brock Lesnar is also sitting this one out but he will return with Rousey for SummerSlam.

Jeff Hardy will go up against Shinsuke Nakamura in a singles match for the WWE United States Championship and Extreme Rules 2018 will conclude with the Bulgarian Brute Rusev trying to take the WWE Championship from AJ Styles. Rusev earned the opportunity by outlasting Big E, The Miz, Samoa Joe and Daniel Bryan in SmackDown LIVE’s first-ever Gauntlet Match.

If you’re a fan of wrestling then WWE Extreme Rules 2018 is an event you won’t want to miss and we’ll show you how to live stream it from anywhere in the world for free.

Live stream WWE Extreme Rules from anywhere in the world

How to watch the WWE with a VPN service
If you live in a country where there's no WWE wrestling broadcast, then there's still a way you can watch. You'll need to use a VPN to dial in to a country that does have one. A VPN is perfect for this as it allows you to change your IP address so you appear to be in a completely different location. We've tested hundreds of VPNs and can recommend these as the best three VPNs currently available:

Live stream on the WWE Network

First thing's first...the WWE Network is your first stop for the most comprehensive wrestling coverage on the planet. It's a paid subscription service (think Netflix, but only for the WWE) available pretty much anywhere in the world, from Afghanistan to Zimbabwe and including the US, UK, Australia and Canada.

The list of devices you can watch on is almost as lengthy, with apps for iOS and Android, PlayStation, Xbox, Apple TV, Roku and Smart TVs all included.

The cost of course varies from territory to territory, but the $9.99 or £9.99 monthly bills in the US and UK should give you a good idea. That includes the Extreme Rules live stream and the ability to re-watch every PPV the WWE has ever put on.

Just wanting to watch AJ Styles v Rusev and don't want the WWE Network after Extreme Rules 2018? Then there's a free trial available, too. Head to the WWE Network to sign up and new subscribers can test out the service for themselves for a full month.

Stick to the WWE network

If you’re watching from the United States, then subscribing to the WWE network is your best bet as it is the most cost effective way to watch. Other pay-per-view providers including Dish, XFINITY and Cable One are showing Extreme Rules 2018 but they cost upwards of $40 each.

It's the WWE Network again

As is the case in the WWE’s home country, the WWE Network is also the cheapest, most convenient place to watch Extreme Rules 2018 in Canada. However, you could choose to go with Bell, Shaw PPV or SaksTel PPV but expect to pay similar prices to PPV providers in the US.

Sky Sports Box Office is the official broadcaster of the WWE in the UK and if you’d prefer not to commit to a subscription model on the WWE Network then it might be your best option. For £14.95 you can catch Extreme Rules 2018 live at 12am and even rewatch the event over the course of the next few days thanks to multiple repeats.

Not in the UK? You'll need a VPN to watch this live stream

If you’re in Australia, then Extreme Rules will be shown live at 9am on Monday morning on the Main Event channel for $30 or $35 depending on your cable provider. Luckily though, WWE Network is also available in Australia, so that’s also a good choice if you’d prefer to save some cash.

The WWE Network is available in Japan

Japanese fans eager to watch Nakamura take on Jeff Hardy for the United States Championship can catch all the action live on the WWE Network. Extreme Rules 2018 will start at 8am on Monday morning in Japan. Alternatively, DMM.com, J:Com and Sukachan are all listed as offering PPV options.

WWE fans in India can tune in to watch Extreme Rules 2018 on Sony Ten 1 and Ten HD on their televisions. The event will be telecasted live from 6.30am IST and will also be shown on the Sony Liv App.

The WWE Network is also available in India and a VPN can let you access the stream with commentary from Michael Cole and Jonathan Coachman.