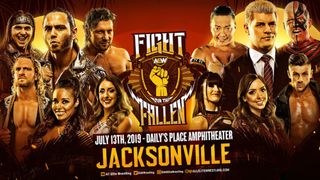 AEW Fight for the Fallen - when and where?

AEW Fight for the Fallen will be held at the 5,500-capacity Daily's Place Amphitheater at TIAA Bank Field in Downtown Jacksonville, Florida.

It's another impressively stacked card for the fledgling wrestling company, with the main event set to be a tag team match pitting The Young Bucks against Cody & Dustin Rhodes.

British wrestling fans will be keeping an eye out for star Bea Priestley, who is set to make her AEW debut when she teams up with fellow debutant, Shoko Nakajima, to take on Britt Baker and Riho.

Elsewhere, former WWE legend Chris Jericho is billed to make an appearance in some form ahead of his  World Championship match against 'Hangman' Adam Page at AEW All Out on August 31. There's a serious side to the event, with the proceeds of the event going towards victims of gun violence.

Wherever you are in the world, we’ll show you how to watch AEW Fight for the Fallen live online so that you don’t miss a single second of tonight’s action.

Live stream AEW Fight for the Fallen from outside your country

Scroll down if you’re reading this in the US, Canada or UK - we’ve described you’re watching options in more detail down there.

But if you’re abroad this weekend and unlucky enough to be in a country where the only way to catch the wrestling is via some dodgy, illegal stream you’ve found on Reddit - or if you discover your home coverage is geo-blocked where you are - then we have a top tip to get a much better way to watch.

1. Express VPN (comes with a 30 day money back guarantee) Simply put, this is our pick as the #1 VPN in the world right now. You can watch on many devices at once including Smart TVs, Fire TV Stick, PC, Mac, iPhone, Android phone, iPads, tablets etc. Check out Express VPN and get 3 months FREE on an annual plan and 49% off the price.

How to watch AEW Fight for the Fallen: USA live stream

The pre-card for Fight for the Fallen kicks off at 7.30pm and will be broadcast on B/R Live as well as the official All Elite Wrestling YouTube page.

The great news for wrestling fans in the US is that the main card will be streamed for free on Bleacher Report Live (B/R Live).

To get access to the live stream, you’ll have to sign up for an account but considering the promotion’s inaugural event Double or Nothing was a $50 PPV, this seems like a pretty sweet deal. Once you’ve setup an account, you’ll be able to watch AEW Fight for the Fallen for free on PC, mobile, Roku, Apple TV or Amazon Fire TV.

AEW didn’t forget about Canada and just like in the US, Fight for the Fallen will be streamed for free on B/R Live. You’ll need to sign up for an account but once you do, you’ll be able to watch the event in its entirety on your favorite streaming devices, your smartphone and on PC.

Unfortunately if you’re in the UK and want to watch tonight’s event, you’ll have to pay.

Thankfully its not too hefty a price - the entire card will  be available to stream live on FITE.TV for a pretty reasonable £8.99.