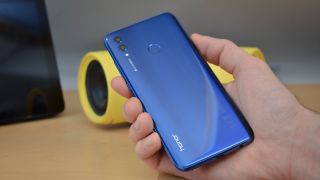 Honor has launched the Honor 10 Lite in India officially. It’s the company’s first smartphone launch in the country this year, which will be followed by the much anticipated View20 later this month.

The Honor 10 Lite will be going on sale starting today at Rs 13,999 for 4GB variant and 17,999 for the 6Gb variant and will be up for sale exclusively on Flipkart starting January 20, 12 PM onwards.

As the name suggests, the Honor 10 Lite succeeds the Honor 9 Lite, which was also launched around the same time last year. However, the successor brings several upgrades in the design and feature department this time. It gets a new front with a ‘Dewdrop’ display and AI-backed cameras.

The Honor 10 Lite comes packed in a reflective glass-like back panel having a dual camera and fingerprint sensor. On the front, it sports a 6.21-inch full HD+ display with a droplet-style notch and thin bezel on all sides which results in 91% screen to body ratio.

On the inside, it runs a 2.2GHz octa-core Kirin 710 chipset coupled with either 4GB or 6GB of RAM. The smartphone comes with 64GB and 128GB inbuilt storage options, both of which are expandable via microSD card (up to 512GB). It also has the GPU Turbo 2.0, making the Honor 10 Lite better at gaming with higher frame rate support and a reduction in jitter rate.

For optics, it gets a 24MP selfie camera with Sony IMX 576 sensor and a dual camera setup on the back having a 13MP and 2MP sensors. The camera also packs AI capabilities like smart scene and object detection. The front camera also uses AI to detect users age, gender and skin tone to get the "best looking selfie".

The phone comes with all the necessary connectivity options like dual 4G VoLTE, Wi-Fi, Bluetooth 4.2 LE and 3.5mm audio jack and has a 3400mAh battery. It is the first Honor phone to come with Android Pie with EMUI 9 in India.

The phone will be available in three colors - Sky Blue, Sapphire Blue, and Midnight Black.