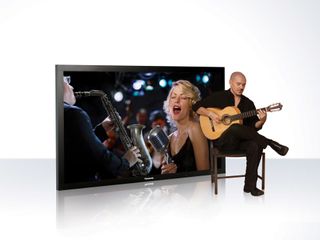 Let's face it most tiny gadgets have about as much impact as a bee in a wind tunnel - and will look and sound just as puny.

What you really, really want is something to make the ground shake, your neighbours quake and your friends to go 'whoah'.

Here, then, are the biggest, widest, heaviest and sexiest AV gadgets you can buy in the UK today. Just don't try to carry them home on your own.

Ironically, these enormous speakers are astonishingly big in Japan - a country with the smallest living rooms on the planet. About the size of an upended Nissan Micra, the Westminster Royal SE features Tannoy's famous 15-inch Dual Concentric drive unit which includes both the tweeter and woofer for seamless, full-range audiophile-quality sound, and its capable of handling amplifier loads of up to 225W.

Your £10 iPod dock makes us sick. If you want proper sound quality on an industrial scale, then you need a KID. Key features include discrete analogue and digital audio paths, Class A analogue circuitry, a 256-step volume control and all the connections you need to get the best from your iPod (any gen) or iPhone. To get the best out of it though you'll also need to team it with the Papa Dock (£2,640) - a second, bigger dock for the KID that also adds a 150W per channel amplifier and power supply. Luckily built-in iPod/iPhone charging comes as standard. Phew.

The TH-103PF10 is so huge it actually takes a truck, a forklift truck and a bunch of burly men to get it within sniffing distance of your front room - and then you'll have to sit 14 feet away from it to get the best picture. But boy, is it worth the effort. What you get it is a gorgeous 1080p Full HD display that's capable of displaying over 29 billion colours. It even includes an HDMI port so you can hook it up to a Blu-ray player... like the Denon DVD-A1UD, in the list below.

There's no need to explain to your kids why they won't be eating this month. Just point them at your TV and show them the stunning picture and sound quality this beast is capable of, and they'll understand. For the 18.9kg Denon DVD-A1UD is probably the finest universal disc player you can buy today, spinning Blu-ray, DVD, SACD, DVD-Audio and Compact Discs with poise, precision and jaw-dropping results. Key features include built-in decoders for all the major surround sound formats, discrete 192kHz/32-bit DAC for all audo channels and jitter-free playback of digital audio via HDMI among others.

Old school hi-fi doesn't come much bigger, classier or better-sounding than this. Standing 91.4cm tall, Marantz's massive legendary series comprises the SA-7S1 SACD player, SC-7S2 preamp, plus two MA-952 power amps, which deliver 300W of heart-stopping power per channel. As you'd expect from a company of Marantz's pedigree, the system comes with all the audiophile bells-and-whistles you'd expect from a high-end system like this. The whole shebang is finished in attention grabbing champagne gold and weighs in at a back-breaking 133kg.