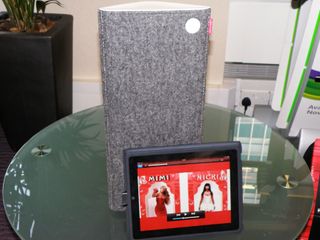 The audio industry is a fickle market to enter, so for a new company to make waves it needs to have a product that's very special, or at least stands out.

Libratone isn't a well-established name in the UK. The company is very young, and the only product it has in the audio market is the Libratone Beat.

It's lucky, then, that this single standalone speaker makes one helluvah impression.

The Libratone Beat only landed in the UK earlier this week, but TechRadar managed to get its hands on the device.

It's a good-looking system. The speaker stands tall at 47cm and weighs around 6.5kg. There's a massive handle situated on the back of the device, which makes moving the unit a whole lot easier.

But carting the thing around isn't as easy as plugging your iPod or iPad into the device and streaming your music.

The Libratone Beat uses a proprietary wireless system for transporting your music from source to speaker. Simply plug the 30-pin dongle into your device and the unit does the rest.

Libratone calls it FullRoom acoustic technology and, within seconds, we had audio filling the room we were in.

With a maximum output of 100dB, the sounds that emanate from the speaker are meaty enough to use as a main system in your house.

Voice was crisp and the tonal quality of the songs we were demoed was more than impressive.

Libratone is putting this down to the shape of the speaker. It's been created to be like a piece of Scandinavian furniture (read: trendy) and has been designed to be put pretty much anywhere in a room.

Well, anywhere except the corner of the room, since this will muffle what is essentially 360-degree audio. This is something that makes sense, but given its Toblerone-like shape, there are certainly going to be a few people who will buy the device and park it snugly in the corner.

Speaking of snug, the chassis of the speaker has been given a luxury finish. You can get the Libratone Beat in wool and cashmere – which makes it one of the first speakers on the market you want to give a warm hug to.

Despite the speaker being pushed for the Apple PMP market, you can also sync the device up to a PC or Mac. The mobile nature of the streaming tech means that your device can be anywhere up to 10 metres from the speaker system.

The Libratone Beat has a UK release date of early December, where it will be debuting on the Apple Online Store.

If you don't fancy getting it on the web, it will be in Apple stores early 2011.

Pricing for the Libratone Beat begins at £549. If you want the speaker covered in cashmere, it'll set you back £599 instead.