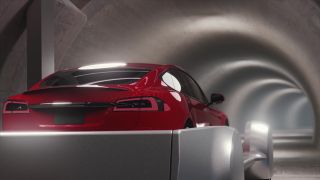 If you've been catching the little hints Elon Musk's been dropping this year about revolutionizing traffic flow with a massive network of underground tunnels, you're probably eager to hear more details about it - and we just got a few.

The Tesla and SpaceX CEO first announced his plans to set up a new tunnel boring company at the end of last year, and four months later we now have a website and a concept video to pore over.

The brief clip, which you can see below, shows cars getting loaded onto carriers which are then lowered below the streets and blasted along tracks at speeds of up to 124 mph (200 kmh), skipping all the gridlock above.

That's all for now - no word on a schedule, or a testing location, or whether your car radio is still going to work underground. But it's an interesting insight into where this idea is headed, and if anyone can pull it off, it's Elon Musk.

Car movements below the streets will be computer-controlled, which means the vehicles can be shuttled around at maximum speed and efficiency, while drivers sit back and watch the gray concrete walls whizz by. It looks as though the tunnels will be several layers deep too, giving even more capacity.

This is all going to take a lot of tunnelling, but Musk thinks he has the know-how needed: in the last couple of days pictures have also started to emerge of the machinery that might one day tackle the perennial problem of city traffic jams.