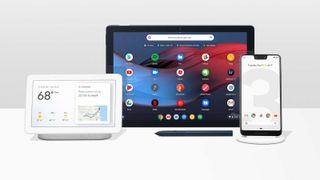 Google has launched a number of initiatives aimed at reducing both its own and other companies' environmental impact over the years (even going so far as to create a dedicated subsidiary dubbed 'Google Environment' in 2009) and as part of that ongoing mission, the search giant has today made a two-part pledge towards sustainability around its hardware products.

The first of those involves product shipping. Anna Meegan, the company’s head of sustainability, consumer hardware, used a blog post to state that “[by] 2020, 100 percent of all shipments going to or from customers will be carbon neutral.”

Exactly how Google plans on achieving that goal is currently unclear, and in part, would depend on environmental commitments being made by the shipping companies the tech giant works with to move its products around the world.

However, Google told Fast Company in an interview that it will also try and change shipping methods earlier in the supply chain, like switching to cargo ships instead of air freight and reducing Google’s overall carbon footprint by 40%.

The second part of Google’s sustainable hardware commitment is to use recycled parts in all of its Made By Google hardware products by 2022. That includes the Pixel phones, Pixelbooks, its smart speakers, and accessories.

This should be an easy goal to keep, as Google has already made a start on keeping the second promise, telling Fast Company that it has begun using recycled elements in its Chromecast devices, and that the fabric covering its Home range of smart speakers is made from recycled plastic bottles.

Google hasn’t yet committed to making products entirely out of recycled parts, which is a goal Apple said it was pursing in 2017 – but which, admittedly, still seems to be many years from being achievable.

While Google has partnered with hardware manufacturers to create its own branded devices for many years (such as its Nexus phone and tablets), the company's 'Made by Google' line of hardware products only launch three years ago, and Meegan does admit that at this point, it does lag behind Apple in sustainability efforts.

Apple’s commitment to holding on to its eco-friendly ways is well known – every year, the Cupertino firm publishes a report on its progress in that regard.

Apple even developed a robot in 2016 – called Liam – to take apart old iPhones and harvest recyclable parts. Now, a new recycling robot called Daisy helps out on the job.

At present, Apple claims that several of its products contain at least 50% recycled plastic. It recycles cobalt from iPhone batteries so that it can be used in new devices, and also makes use of recycled tin, aluminum, gold and other metals.

Other major gadget makers have also started making a push towards improving their environmental credentials. Earlier this year, for example, Samsung promised to begin using only eco-friendly packaging for its phones.

Google is keen on keeping its sustainability commitment, with Meegan promising it will become standard in the hardware design process. The search giant already has a recycling program in place that provides a shipping label for users to send their old or unwanted Google products back to the company, although it is currently restricted to the US only.