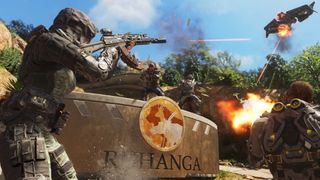 Some people don't really care about Call of Duty's single-player campaign. The notion of disliking the campaign mode is nothing new to anyone who plays the games year after year. After today, however, not liking the campaign might radically re-shape how the series is sold online.

Activision, the game's publisher, has released a strange, new limited edition, single-player-free version of Black Ops 3 on Steam for $14.99/£11.59, similar to the version it released on the Xbox 360 and PS3 last year.

Marketed on Steam as the Call of Duty: Black Ops III - Multiplayer Starter Kit, the stripped-down version gives you access to ranked matches and a few of the customization options that help you deck out your soldier with gear. You'll be able to access the Weapon Paint Shop, Gunsmith, Arena, Freerun, Theater and the Black Market areas of the game, which for some is probably enough.

Activision, it seems, is banking on selling gamers an appetizer and hoping that will lead them to buy the full meal.

The full meal, in this case, includes the Zombies game mode, story campaign, ability to play in Multiplayer custom games, ability to "prestige" (your level will be capped at 55 in the Starter Pack), access to mod tools or modded content (once released), access to unranked server browser (once released) and the ability to access Dead Ops Arcade II and Nightmares mode.

So, basically everything that isn't the online ranked multiplayer mode.

The multiplayer-only game went on sale earlier today and is only available until February 27. The bright side here is that if you decide to buy the starter pack and then upgrade to the full game, Steam will deduct the $15/£11.59 from the cost of the full version.