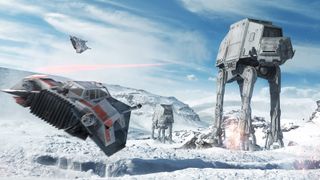 This is our second opinion review of Star Wars Battlefront. One month on from release, how is the game standing up? We've gone back to take a look.

As soon as that big AT-AT foot dropped in front of the camera in the E3 2013 teaser trailer for Star Wars Battlefront, I was on board. Money was on the table, and all I needed was for EA to deliver the disc and place the controller in my hands.

That excitement was through the roof right up until release – I'd loved the original Star Wars Battlefront games (especially the second one) and was stunned that the franchise appeared to have died a premature death.

The lure of throwing yourself into the Star Wars universe and experiencing the action close-up is irresistible. Becoming a participant in those sprawling battles we love from the films makes so much sense. But part of the problem with Star Wars Battlefront is also what defines it: you're rarely a pivotal member of these battles.

You are the cannon fodder – you play as the disposable, nameless Stormtrooper or Rebel solider, and your only purpose is to shoot at the enemy and try not to die too quickly. You're not the chosen one, you're not a Jedi, and you're certainly not a hero.

When it was announced that Battlefront would focus on online (there is single player, but it's limited to wave battles, and there's no story mode) my heart sank a little. I'm a fan of the online multiplayer shooter genre, but there's only so much I can get out of that space – especially when there's so little depth.

I'll probably dip into it for a few hours every month – if that – but it needs more meat on the bones if it's going to earn any more of my time. One month in, it's lacking, even with the Battle of Jakku DLC.

And the more I play Battlefront, the more it feels like spawn, shoot, die, repeat. It's a repetitive formula.

Booting up Battlefront for the first time was one of the most exciting gaming experiences of 2015 – but after a few hours I was already growing tired.

It's difficult to pinpoint the problem. The combat system is on point, weapon selection may be lacking but feels OK to me, and I feel fully immersed within the experience.

Battlefront is also one of the best looking games I've ever played. The only way in which it falls short of The Witcher 3: Wild Hunt is its smaller environments. Every time I play on Endor, I'm astounded by the huge, gorgeous space battle happening overhead.

All the little touches give you the feeling you're a part of this massive universe, albeit a highly disposable part. The sound editing deserves special mention: the screech of a TIE Fighter, the sound of a blaster firing, even the noise of an AT-AT crawling along – Battlefront gets these things spot on.

With this entire world built up by DICE, I don't see why a single player story couldn't be integrated. The gameplay, the world, the sound design – everything is here but there's nothing at the heart of it. I want one coherent story at the core to work through, one that won't make me contemplate the fragility of life.

DICE has tried to create something a little different with Survival mode, where you play against waves of enemies with various objectives along the way before getting a star rating telling you how good you are at shooting things. However, it's hardly a worthy replacement for a full single player campaign.

Even though I've been playing for weeks, Survival mode is still my highlight of the game. But it could have been so much better.

However, local multiplayer fares much better. The fact you can play with a friend who is sat on the same sofa is a great feature and something sorely lacking in the main online mode.

Survival mode also highlighted one of Battlefront's biggest issues to me: you have to play with other people.