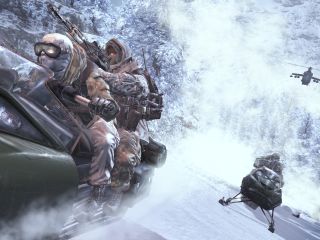 Do terrorists use videogames to train for real-world attacks?

A Russian TV channel is suggesting that a recent airport terrorist attack may have been carried out by operatives trained on Activision's Modern Warfare 2.

A terrorist blew up 7kg of TNT at Domodedovo airport this week, killing 35 people and injuring 110.

Russia Today, a government-financed satellite channel, ran a report this week mixing footage of the recent Moscow airport bombing with the No Russian level from Modern Warfare 2.

Russia Today also stressed that the game was made by Americans.

Walid Phares, a Fox News terrorism analyst, said that terrorists might be using videogames to train for real-world attacks.

"I think those who have been radicalized already — let's suppose in this case jihadists, Al Qaeda or [some] other kind — they look at the games and say these games will serve them to train," said the terrorism expert.

"The bloody scenes of the Moscow attack are reminiscent of what can be seen in a year-old computer game, the scenario of which controversially involves a character who is urged to kill civilians in an imaginary Russian airport, " reads Russia Today's report.

"In the mission dubbed 'No Russian' the player goes on a terrorist rampage, helping to massacre civilians in a fictitious Moscow airport. It may have seemed too gruesome and tragic ever to come true."

Via the New York Times.