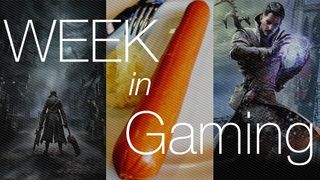 The gaming world has been shaken like a bum bag on Elvis Presley's hips this week, because of a number of scandals. You'd think we'd have all got used to it after the millionth gaming scandal (that was the time Banjo from Banjo Kazooie went into rehab) but no, we still get upset about things that happen to people we don't know and games we haven't played.

What's the scandal this week? Why, the mysterious disappearance of the beloved video game designer, Hideo Kojima. Where has he gone? What is he doing? Was he ever even real in the first place? Since March 19, the genius creator of Metal Gear, he of the cryptic sausage tweets, has been silent as the hills in Silent Hills.

No tweets, no sausage photos, and strangest of all, no credit for the latest Metal Gear - his name has been taken off all branding to do with The Phantom Pain, and Kojima Productions LA has been renamed to Konami LA Studio.

It is of no great surprise that the internet is currently whipping itself up into a conspiratorial frenzy. Perhaps he's been fired. Maybe he stormed out. Or even ascended to a higher plane. What if he's just been hiding under a box this entire time in an effort to immerse himself in the role of Snake? Well, friends, I'm sorry to say that you're all wrong, and here's why.

Our dear Kojima has finally mastered the art of transfiguration, and has turned himself into a sausage. The signs were all there: his infamous "farewell sausage" tweet was a clue. He wasn't saying goodbye to the sausage, or saying that it was a sausage of farewell - he was saying "Farewell (I am about to be a) sausage". Read between the lines, guys.

In much less secretive news, the highly anticipated PS4 exclusive Bloodborne came out this week, and it's so good that I literally have no one to talk to any more. Seriously, I call up my friends and they answer, mumble something about flappy capes and twiddly moustaches and plagues, and hang up again. I think they're playing Bloodborne. Either that or they've become over-the-top, slightly theatrical villains.

Bloodborne is being hailed as a game that rivals, if not beats Dark Souls for being hard, expansive and generally fantastic in all the ways, which is good news for its developers, From Software, who also did Dark Souls. Is it worth a play? Probably, if you like good games, gorgeous graphics and gloating to all your PC Master Race chums.

But if you don't own a Playstation 4, what is there to play this week? Well, let me recommend you my favourite dish: a bit of Dragon Age: Inquisition DLC. And by "dish", I mean Dorian. He's the dish. Because he's dishy. The Jaws of Hakkon story has all the things you love about Dragon Age: questing, secrets, dragon slaying and getting to chat to lovely Lead Scout Harding. No, you can't date her yet. Wait for the Lead Scout Harding DLC. It will happen, right BioWare? Please?

And if you don't own any consoles, and you just want to know about the hottest mobile games, then you're probably a fan of Crossy Road, a modern-day Frogger for people with quick thumbs. But you're probably thinking what we're all thinking: why can't it be first-person? I have excellent news for you, friend. It can!

That's all the news worth knowing for this week, friends. Remember: if you find a sausage anywhere, BE CAREFUL. It could be Kojima. Make sure to ask your sausage if he is a renowned video game developer BEFORE eating him. Be safe.