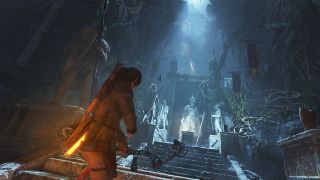 Lara doesn't deserved to be buried by Fallout 4

You're climbing the sheer face of a mountain; leaping from one sheet of ice to another, clinging on for dear life with your pickaxe while Mother Nature tries to shake you off with waves of falling rocks and powder.

You're sneaking through the night-time tundra with nothing but an old bow and a few crafted arrows to your name. You're being hunted by a group of bandits, but it isn't until you've snuck up and dispatched every last one that you realise you're the hunter after all.

Now you're climbing the wreckage of an old Spanish galleon frozen in time and ice hundreds of years before. Its broken hull and shattered masts create a maze of steps that lead you to new treasures, entombed in darkness.

Then you look at your window and realise everyone else is playing Fallout 4 (yes, this a street of people who just happen to all play games by a window - just go with it, okay?).

But why aren't they playing Rise Of The Tomb Raider? Why aren't they jumping up and down with glee, practically bursting with love like they were when the reboot dropped in 2013?

Because they're all philistines, that's why.

Now before your outrage gland starts pumping into overdrive, why don't you take a little breather, step away from the social media and have yourself a nice seat. Comfy? Good, then I'll begin.

Fallout 4 is great. Let's just get that out of the way from the off.

I wouldn't say it's brilliant (Skyrim, my love, I'll always have eyes for you), but it's one of those games that proves just how well Bethesda understands the meaning of the words 'role-playing game'. Just like The Elder Scrolls V, Fallout 4 gives you all the tools to engineer an adventure on your own terms.

Even if that destiny involves building and modding houses. Hey, it's your collection of rubbish - you do with it what you will. Oh and Dogmeat? You're a fine pooch, but you're no Fido from Fable 2.

People love themselves a bit of Fallout 4. In fact, they love it so much they've practically forgotten another highly-anticipated, mega-blockbuster of a game came out on the same day. Starring a practically unknown gaming heroine by the name of Lara Croft.

I know, I've never heard of her either but apparently she was a big deal at one point. She might have gone into rehab after a Lucozade addiction.

There's a chance (and I'm saying this with a fistful of salt here) that Microsoft's year-long exclusivity may have soured some people to the Tomb Raider franchise. Banishing it from memory until next year's PlayStation release, when it will inevitably be swallowed up by next year's big triple-A releases.

And I guarantee you PS4 players aren't going to be that bothered about a year-old game some nine months removed from the release of Drake's final chapter, Uncharted 4: A Thief's End.

And here's the rub: both now and in its inevitable future, Rise Of The Tomb Raider doesn't deserve the seemingly lukewarm reception it's received.

Square Enix has managed to take the bold idea it had two years ago in reinventing Miss Croft and essentially rewriting the book on what a Tomb Raider game is now and created something brave, exciting and exhilarating to play.

If Tomb Raider was the overture two years ago, then Rise is the symphony triumphant.

For a start, it's finally outgrown the Uncharted cosplay that typified its predecessor. Yes, the developers at Square Enix probably took more than a little inspiration from Nate and co, but who wouldn't take note of the success of a game that made treasure hunting relevant to gamers again?

But the Tomb Raider we see now has moved far beyond that.

For the first time in a Tomb Raider game, you feel empowered by an open-world that's actually full of things to do rather than a series of collectibles that marginally boost your XP and a set of tombs so short you were practically offended. Freedom is the name of the game and everywhere you turn there's something new to do.

Tombs are now bigger and more numerous, your Xbox controller gently vibrating when is nearby (they also contain upgrades that will make your experience a lot smoother should you make the effort to seek them out). Campfires are also more prevalent, offering new opportunities to upgrade Lara's attributes and weapons.

There's even a splash of Assassin's Creed-style verticality. Well, Assassin Creed 3, to be precise. Just like Conner's much-maligned (and considerably underrated, IMHO) adventure, Lara can climb trees and leap between them for a cat-and-mouse take on hunting.

Even the music feels momentous - a dynamic drum beat that builds from gradual hum to a full on Mad Max-esque roar as you get closer to enemies soldiers or wolves.

Even the story presents the most compelling Croft adventure since The Last Revelation.

After writing its predecessor and the Dark Horse comic series that links the two games together, writer Rhianna Pratchett presents her most comfortable work to date - Lara feels more human than ever as she attempts to unravel the mystery surrounding her father's suicide.

Considering how close to home that theme resonates considering the heart-breaking passing of Sir Terry Pratchett earlier this year, ROTTR feels all the more poignant.

Come on, how could you not love a game where you're heroine wades through dynamic snow that smothers and sheds as she makes her way through the Siberian wilderness? That's not even creepy, either!

Look, I know you all love Fallout 4 and Bethesda are great (even if they can't release a bug-free game at launch), but Rise Of The Tomb Raider deserves your love this season.

It's the best thing to arrive on Xbox One since Ori And The Blind Forest (yes, Halo 5: Guardians is amazing, but it's just another iteration of the Halo formula we've all gorged on before) and more than enough reason to finally invest in an Xbox One.

And considering how cheaply Microsoft will be letting its console shift in the Black Friday sales, you'd be clinically insane not to join Lara on her latest adventure.