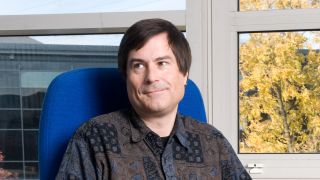 On its release in 1984, Elite was the pinnacle of bedroom-programmed games. It was a title that had a vision beyond the limitations of mere hardware, executed by a pair of undergraduates who had barely escaped their teens. Now Elite: Dangerous brings the story full circle - although it's a bigger game with bigger costs, its Kickstarter funding and independent distribution give it a homespun feel.

David Braben and co-designer Ian Bell began work on Elite while they were studying natural sciences and mathematics respectively. Braben had an Acorn Atom computer, Bell had a BBC Micro and both had tried programming space simulations with varying degrees of success. Elite initially took shape as
a space combat title, but it felt empty and unfocused. The pair then added the trading system - arguably Elite's greatest asset.

In 1984, Elite was released on the BBC Micro and its budget brother the Acorn Electron. At the time there was nothing else like it, and it was the game's sense of freedom and exploration that captured the public's attention. Here, in a mere 22 kilobytes of memory, was a game in which players were able to set their own path through the universe and make decisions about how they played.

Of course, a game of such vast scale inhabiting such a small amount of memory meant some ingenious cutbacks had to be made, including the development of a procedural generation system for creating and naming the game's 2,000 systems and planets. It even caused one of the galaxies to contain a planet amusingly called "Arse", but fortunately Braben and Bell noticed before the game was published with the bum word.

After its initial success, the game was ported to all the platforms that mattered: the Amiga, Atari ST, Apple II, Amstrad CPC, Commodore 64 and even the then-upcoming IBM PC. Each game acted a little differently to the original. For example, the Amstrad version had fewer ships and the Commodore 64 version included a reference to Stanley Kubrick's 2001: A Space Odyssey.

The fervent following that the game gathered led to fans taking it apart and reassembling it. For example, Angus Duggan's Elite A included more ship types and cargo delivery missions. In 1993, Frontier: Elite II was published. The successor included full-colour graphics, curved polygons and texture mapping, and Braben had managed to get the entire thing to fit on a 3.5-inch floppy.

It also included some ridiculously cool sci-fi mechanics, such as the ability to slingshot around stars and land on planets. Ultimately, though, the game divided players between those who found it too boring, and those who appreciated its dogged adherence to Newtonian physics.

Bolstered by Elite's success, Braben set up his own development studio - Frontier Developments - in 1994. The company created Elite's second sequel, Frontier: First Encounters, in 1995. However, due to disagreements between the studio and publisher GameTek, the version was full of bugs and it received
a lukewarm reception due to being half-finished. Braben went on to sue GameTek, and settled out-of-court four years after the game's release.

As well as developing Elite: Dangerous, Frontier Developments has also created some big games, including Rollercoaster Tycoon, acclaimed WiiWare launch title LostWinds, and cute Xbox animal simulator Kinectimals. We're still waiting for The Outsider, though. This techno-thriller game relocates Elite's freedom into a real world scenario. It's currently "on hold", but we hope Braben turns his attention to it once he's completed Elite: Dangerous. We spoke to him about the return of Elite, pushing the bounds of game development, and why space is back in style.

Why is Elite able to make a return now when we've had so many false starts before?

David Braben Elite is in our DNA, and we have always had skunkworks development of relevant technologies that we have been building upon over the years. More recently, various things have come together to help catalyse it: the technology has finally caught up to our ambition, but Kickstarter has also offered an excellent opportunity.

Has anything completely unexpected happened during Elite: Dangerous' alpha?

DB Yes - already in the alpha 2x multiplayer builds we have seen interesting player behaviours emerging. A good example is the Ethics and Credits scenario, which is really the first glimpse of the flexible second-by-second roles and choices that the game will offer.

Some players were patrolling in Sidewinders together. They were waiting for others to kill miners and would then collect the bounty on their heads. It's a great example of the value of having our backers getting involved during development. We're able to drill down into the balancing to maximise the opportunity for such emerging behaviours.

Are we going to have the same sort of epically accurate star map that we had in Frontier?

DB Of course! In Elite: Dangerous we are going a lot further. We have some 150,000 star systems visible from Earth in real life; in the game this will be backed up with some 100 billion more that will be scientifically accurate in terms of how they formed etc. They will be generated procedurally to fit the observational data as best we can, as most of these systems are not individually visible from Earth, even with Hubble.

Each of these will include stellar systems with different types of planets, gas giants, rocky moons, asteroid fields and so on. One great side effect of this is the night sky is "correct" when viewed from Earth and changes gradually as you travel to nearby systems. The constellations gradually become unrecognisable as you move further from Earth.

Why do you think that space games have been unfashionable for so long?

DB I think games set in space became quite niche. They lost sight of what was the key element of Elite and Frontier - freedom. The true successors to Elite and Frontier were the Grand Theft Auto games. For me, the setting is secondary to the feeling of freedom.

The success of the Elite series has always been based on the freedom that players are given. It's all about individual choice in an open world - you don't select "pirate" or "bounty hunter" or "trader" from a list, you simply do what you want and events will unfold accordingly.

Traditional publishers have always regimented games into strict categories for forecasting and planning reasons, and somehow "space" became a category in itself - including games like Dead Space, Mass Effect and Halo, which are all quite different.

How much friendly competition is there between you and Chris Roberts - especially now you've got the Elite: Dangerous alpha out before Star Citizen's dogfighting module?

DB I'd place the emphasis on "friendly" as we are both alpha backers of each other's games, and both want the other to succeed. The games we are making are very different - Star Citizen is a handcrafted story-based game - but there are common elements, the most obvious being that they are both set in space.

Many of you will have seen the discussion Chris and I had during the Elite Kickstarter campaign, where we discussed the return of the space game at length with Gary Whitta. If you haven't seen it, you can still check it out through our website or the Elite: Dangerous Kickstarter site. It's also not just Elite: Dangerous and Star Citizen, there are others, too. I think shows there is strong interest in this area, which is a very good thing.

What are your plans for player created content, such as companies or galactic organisations?

DB To start with, players are just another commander, trying to make their way in what is quite a hostile galaxy. However, participants can form alliances with other players, and we do have plans down the line for building space stations and so on.

Is it generally easier or harder to program a game now compared to the 1980s?

DB There are several dimensions to it, I think. Put in today's language, Ian and I were a micro-studio, and when you're in that environment, communication is so much easier. The largest game that Frontier Developments has made to date involved almost 400 people! While the Elite: Dangerous team isn't quite that huge, between 70-100 people are closely involved. It's still a different world when it comes to communication and getting a shared vision for all the different aspects of the game. In modern game development, team communication is probably the biggest challenge, and this didn't really exist in the 1980s.

Looking at just the programming, I think today it is a lot simpler to do the same sort of thing. Debuggers and the fancy programming aids we have nowadays make it much easier, but the expectations are also very much higher. The scope of what happens in a ship in Elite: Dangerous, and hence the complexity of the programming task, is far greater. This more than makes up for all the fancy tools we have available now. With the original Elite we literally used every byte of memory the BBC Micro could offer. We are trying to make sure we similarly push the boundaries of what's possible in Elite: Dangerous using modern computer hardware.

When you were developing the original, was there a point when you realised you were completely changing what games could do?

DB With the original Elite, I think the realisation came for me when we presented the game to Thorn-EMI in London. They wanted us to completely change the game - have three lives, a score, a typical playtime of 10 minutes, and no saves. They really didn't understand what we were trying to do. I started to think that we had a real hill to climb, to sell the idea to a publisher.

The fact that it was so different to any of the competition at the time meant that after Elite came out, publishers were much more prepared to experiment with different types of computer games. They were willing to look at ones that weren't derived from the arcades.

And have there been any similar moments while you have been designing Elite: Dangerous?

DB With Elite: Dangerous, it was the realisation that we didn't have to follow publisher constraints in what we could do. It has allowed us to have a galaxy that continually changes based on player actions. I think this will prove to be very significant.