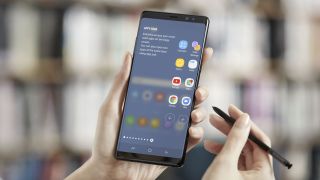 We've heard the rumor that the Galaxy Note 9's new S Pen could very well be its standout feature, but we didn't yet have any (realistic) ideas of just what that might entail — until now.

According to prolific leaker IceUniverse , the new S Pen is set to receive a Bluetooth upgrade, allowing it to do much more than just write on the Galaxy Note 9's screen.

It's believed the S Pen's new Bluetooth functionality will enable it to control your music (we imagine the stylus' button will be used to pause and skip tracks) and be used as a long-range self-timer, which would be especially handy for taking group photos from a distance.

The Galaxy Note9 SPen can be used to control long-range self-timer, control music playback, because it is a Bluetooth device, it will do something unrelated to the pen. pic.twitter.com/WPS83xUskqJuly 1, 2018

Along with the S Pen's reported Bluetooth functionality, the Galaxy Note 9 is also rumored to include a massive 4,000mAh battery and some truly powerful specs, as well as what appears to be a very a similar design to last year's Galaxy Note 8.

We'll know more in the coming weeks, as the Galaxy Note 9's launch date has now been confirmed for August 9, 2018.