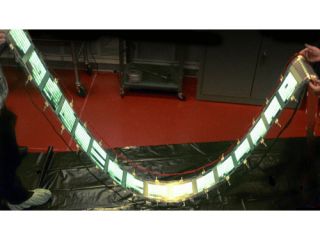 Flexible OLEDs: are they the future?

OLED lighting could be available on a commercial scale within two years if General Electric's recent manufacturing ideas go to plan.

Anil Duggan, head of GE's OLED research team, says the panels the company is creating using a printer could be ready for the market by 2010, though he agrees this is "very aggressive".

"We're trying to be as low-tech as possible," he added, highlighting one of the major problems of OLED manufacture.

GE is currently working with roll-to-roll OLED printing, literally running the organic lighting material through a printing press in the same manner as a newspaper, a process which could lead to OLED lighting at around 60p per square foot.

However, sizes are currently limited to 8in panels, but GE will be building a machine over the next year that can run to much larger sizes.

"It's not going to be competitive with fluorescents in 2010," Duggal said, which added to the initial high cost of manufacture means the technology will be limited to high-end architectural areas.

But economies of scale will drive that down, as will improved techniques learned from display manufacture, where OLED is set to compete with LCD and plasma in the TV and monitor stakes.

"In the 1950s, people were talking about electroluminescence the way we talk about OLEDs today," Duggal said. "It's humbling."