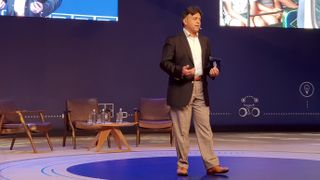 Cities make up just three percent of the Earth's surface but consume 75% of it's resources. And they’re about to get a lot more denser.

“A billion more people will flood into cities in the next 35 years” says Rajendra Rao, Chief Executive Officer of Ford Smart Mobility LLC. “That's going to put in enormous strain on mobility.”

Present at the City of Tomorrow Symposium, we asked Rao how he envisions the city of tomorrow.

“We believe the city of tomorrow is going to be a framework for a more dynamic partnership between citizens in these cities with businesses and institution in the government. And that will be a progressive relationship where changes to infrastructure will be more dynamic and fluid, so we can truly leverage technology."

The four problems of today

Rao believes there are four challenges in the current transport paradigm that need to be addressed:

Rao and his team are currently focused on finding out how users would interact if they had access to this technology and gives the example of the experiment Ford carried out with Domino’s Pizza in the US.

“We're starting with learning about how users will interact with such technology. When we get the answer to that, we can then work back and figure out how we deliver that experience at scale.”

While Ford is learning about human behavior, it is also trying to solve the problem of fleets doubling every seven year. And that's where deep learning and artificial intelligence comes in.

“We think AI can be applied in the urban transit analytics space. Dynamic shuttle or the ride sharing platform requires the use of deep learning for building algorithms. These algorithms ingest current routes and transit demand patterns and then create transit schedules, capacity and routes for new cities."

But couldn't aerial transportation help in solving some of the congestion problems? Dubai recently announced it's plans to use drones as taxis carrying people from one part of the city to another.

“I think that can be applied for more humanitarian outcome- think about what happened in the US recently with Harvey and Irma- pretty devastating impact of unexpected events. Whether it’s flooding or earthquake or even acts of terror, these are creating catastrophic scenarios.

Being able to be effective as a first responder, to help with delivering humanitarian needs and be able to bring a city back on its feet- those are areas we should focus on. The city of tomorrow needs to be more resilient and we want to be able to enable that."

As exciting as flying autonomous cars may sound, getting to that future will not be an easy task- especially looking at the urbanization growth trend for the next few years. Things will get more difficult before they become easier and Ford Mobility seems to be moving in the right direction to tackle such issues.

We’d like to thank Raj Rao and the team at Ford Middle East for giving us the opportunity to have this discussion.