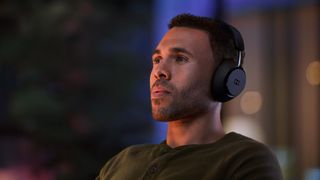 Dolby’s days of being an audio tuning company are over – today, the company introduced its first pair of consumer-facing headphones, the Dolby Dimension.

These new over-ear headphones are designed to enhance your TV viewing experience and, according to Dolby, bring the cinema home to you.

What Dolby’s doing to make that happen is that these wireless headphones feature active noise-cancellation and support up to eight Bluetooth connections at a time. This means you can connect them to your phone, your smart TV, your computer and your tablet, and cycle between them. They also let you call up your personal assistant of choice with a long press of the side button and feature Dolby’s Cinematic Sound that keeps the sound in front of you when you turn your head.

The feature Dolby is most excited about, however, is the ability to pipe-in audio from the outside world. It’s a feature we’ve seen before on the Sony WH-1000XM3 and other noise-cancellation headphones, but Dolby is allowing you to customize just how much sound gets let in via an accompanying app.

Not your grandpa's TV headphones

From the sounds of it, Dolby is really ramping up the quality of wireless TV headphones - you know, those things your grandparents used to wear so they could listen to the TV at max volume. There hasn't been a huge improvement in this area for years, but now it looks like Dolby is trying to bring higher quality audio to that under-served audience.

That said, while these could be fantastic home cinema headphones, they’re not going to replace any of the mobile noise-cancelling headphones on the market as they don’t fold up or offer a 3.5mm auxiliary jack for in-seat entertainment on airplanes - so don't toss out your Bose or Sony headphones just yet.

According to Dolby, the headphones will last 10 hours on a single charge and feature a Quick Charge mode that enable two hours of playback with a 15- to 20-minute charge. In terms of specs, the 40mm driver headphones weigh around 330 grams, use a Snapdragon Quad-Core Arm Processor for audio processing with aptX support and have a 20 to 20,000 Hz frequency response.