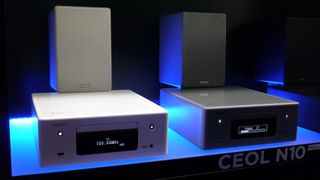 You've got a ton of CDs collecting dust that you can't bear to get rid of, but you still love the new-fangled convenience of a smart speaker. Denon's after your money – it's releasing a new hi-fi system that packs in all the latest connected features, while  still supporting good old physical media.

The CEOL N10 is the successor to the well-received N-7, which at eight years old is now looking more than a little long in the tooth.

Thanks to Denon's HEOS streaming technology however, the N10 offers both Amazon's Alexa voice assistant and (with an update due in August) support for Apple's AirPlay 2.

This means the speaker system can be controlled with your voice thanks to the Alexa integration, it can beam physical media playback to other HEOS speakers, and will also work with any multi-room groupings that Apple's tech allows for.

Available in snazzy white or black acrylic finishes, touch-sensitive controls can be found on the top for when you're not controlling the action with your voice. Internals have been refined since the N-7, with a new circuit design said to improve audio clarity and a Class D amplifier giving the system a little more punch.