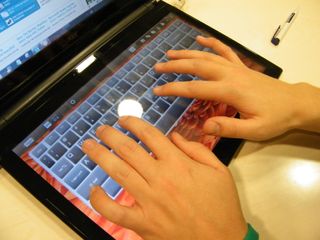 Emerging from the ashes of the Microsoft Courier project in collaboration with Microsoft, the Acer Iconia dual-touchscreen laptop really is a curious piece of kit.

Packing two 14-inch capacitive touchscreens, the Iconia is a booklet laptop-tablet hybrid device running Windows 7 Home Premium. It does away with the traditional keyboard and mouse setup in favour of an exclusively touch-based interface.

Our colleagues at T3.com grabbed some Acer Iconia video footage which you can watch below.

The Courier concept was radically different from all the touchscreen tablets that we've seen so far. It was designed with a journal-type interface, enabling you to organise dynamically-updating web clippings, images, notes and other content in a way that was designed to make your life a lot easier to organise.

But while the Microsoft Courier was designed to be a dual-screen, portable touchscreen booklet, the Acer Iconia is an absolute monster in comparison.

While it retains the general concept of the Courier project, the Acer Iconia weighs a bulky 2.8kg, and packs some surprisingly high-end system specs. At its heart beats an Intel Core i5-480 chip, 4GB of RAM (par for the course on a Windows 7 machine), 640GB storage and a four-cell battery.

And yes you read that correctly, it's a four-cell battery. Which lasts just three hours. Yeah, we know.

Connections include Wireless N and 3G, while you can connect to a TV or third monitor using the HDMI port. There are also two USB 2.0 ports and one USB 3.0 port.

How much does it cost?

The price is also rather different to most touchcreen tablets out there. The Iconia will initially go on sale on January 15 for a rather hefty £1,499 in John Lewis stores, as well as Micra Anvika stores such as Harrods and Acer Experience Centres.

By the end of February, though, the Iconia will be available from all the other major retailers, and that price might come down at that point too – the £1,499 price point is merely a suggested figure.