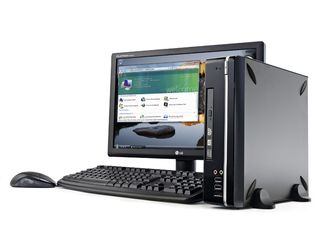 The NovaTech Ion Fusion uses the Intel Atom CPU, but is it too early to adopt one?

Tales of unintended consequences don't get much better than Intel's nifty little Atom processor. The original remit for Atom was to take Intel's x86 microprocessor architecture to places it had never previously reached.

Key targets were embedded applications (including cars), ultraportable internet devices and consumer electronics from HDTVs to smart appliances. What the company didn't expect was to accidentally create a whole new genre of computer – the netbook.

It's easy to see how it happened. Some of those original goals are extremely ambitious. Atom is not yet efficient enough to use in smartphones. Likewise, industries such as motor manufacturing have long development lead times, so it's unlikely Atom will appear in cars before the second half of 2010.

But in the meantime, Intel had to get the Atom ball rolling. Making PC chips is obviously Intel's core competence, so the easiest option was to put Atom into familiar devices and form factors. Thus the ultra-low-cost mini laptop, otherwise known as the netbook, was born.

And what a smash hit it has been, underpowered or not. Cheap desktop PCs based on Atom – which are known as nettops in the computer industry's slightly strained vernacular – haven't been quite such a roaring success. But they do pose the same basic conundrum for Intel.

Is the purchase of any given nettop or netbook in addition to, or at the expense of, a PC based on one of Intel's full-fat computer processors? That would be a disaster for Intel, the worst kind of fratricidal cannibalisation imaginable.

It's therefore not surprising that Intel's messaging on Atom has been decidedly mixed. On the one hand, it bigs up Atom as the ultimate weapon for mobile internet access. But in the context of nettops, Intel routinely bad mouths the Atom, insinuating that it's just not powerful enough for a decent computing experience.

All of which makes it tricky to know what to expect from a nettop PC, or even how to judge it. In the end, things come down to value and usability. Nettops ostensibly offer a PC capable of everything that 95 per cent of home users demand, but in a cheaper, smaller and more efficient package. But do they deliver?

Certainly, the underwhelming performance of the Atom processor in netbooks does not bode well. On the other hand, Intel has recently released a dual-core model of the processor for nettop systems, the 1.6GHz Atom 330. Thanks to support for two software threads per core, the 330 has no less than four logical processors.

However, don't imagine that it offers performance that even comes close to a proper quad-core desktop CPU. In our benchmarks, the Atom 330 lagged behind Intel's entry-level Core i7 920 processor by epic margins. The Core i7 is eight times faster for video encoding and 10 times faster at professional graphics rendering. Needless to say, such applications are hardly model usage.

The real problem is the Atom 330's sluggish performance during light duties such as casual internet browsing. If you're used to the essentially lagless response of a modern PC, surfing the internet on an Atom nettop is very frustrating.

It's a bit like being transported back seven or eight years to the days when PCs couldn't quite cope with the demands of the internet. You may not be paying a lot for this system, but it's still a hefty sum for an underperforming machine.