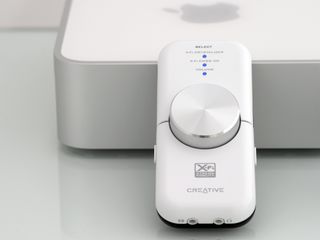 The plug-and-play Creative Xmod requires no installation or drivers

Audio pioneer Creative Labs has been ordered to stop claiming that its Xmod sound system can up-mix an MP3 to 'beyond CD quality'. The external plug-and-play soundcard gadget claims it can repair music files which were damaged during compression and restore them to their former glory.

But the Singapore company has now been told it must substantiate these claims before it can continue using them to promote the product, part of the X-Fi range.

It was the British Advertising Standards Agency which handed out the slap on the wrist; apparently an audio engineer saw Creative's claim and took issue with its authenticity. The ASA's ruling yesterday upheld the complaint, saying that the company which also makes the Zen range of MP3 players had not shown any "evidence to show that the sound [that the Xmod] delivered was better than CD quality".

Luckily for Creative - which squeezed $100m (£52m) out of Apple last year in a patent infringement case - the ASA did not agree with the engineer's other complaint regarding Creative's claim that the Xmod produced "an experience beyond studio quality".

"We considered that the claim 'An Experience Beyond Studio Quality' focused on Creative's view of the listener's experience and noted it did not state that the product delivered sound beyond studio quality," the ASA said. "We concluded that the claim was unlikely to mislead."

The X-Fi Crystalizer up-converts MP3 music by analysing and identifying which parts of the audio stream have been truncated or damaged during compression. It restores the highs and lows such as the snare drums, basses, cymbals crashes and guitar plucking that are damaged during the compression of MP3s. The X-Fi outputs 24-bit surround audio at 96kHz.