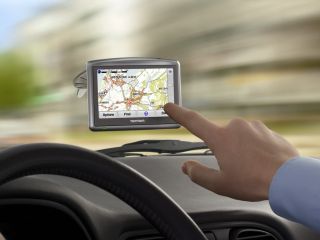 Every day hundreds of drivers choose the directions of a dumb machine over their own common sense. Whether you're using a TomTom, Garmin,

or other GPS system, don't follow it blindly. If you're driving around the UK, make sure you double-check if your satnav system decides to send you through...

Letting your satnav get you lost is as much a case of panic as it is of ignoring the signs. Directed down an ever-narrowing lane near Stroat in the Forest of Dean, one coach driver decided to press on instead of turning back, leading to her stranding her coach and cargo - a group of pensioners off to the Forest for a tasty lunch - on a grassy bend.

The only route of escape was a cross country drive over the stubble of three freshly-harvested fields. [Full story]

As if plunging your much-loved car into a too-deep ford wasn't bad enough, one notable error has been sending unaware drivers directly into the River Severn.

The directions, which send drivers down a lane which has since become adorned with a 'Sat Nav Error' sign, seem to think that a disused foot passenger ferry terminal is in fact a road bridge. Hundreds of swearing drivers reversing their HGVs up the single-lane track would argue otherwise. [Full story]

Drivers in Glamorgan may have noticed an unusual addition near the village of St Hilary - signs imploring them not to trust their satnav systems. Frustrated by lorry drivers plunging their enormous vehicles into - and getting stuck in - the village's narrow streets, Vale of Glamorgan traffic engineer Mark Simpson erected the signs, which feature an iconic satellite floating above a crossed-out lorry. Whether these abstract signs are more effective than the 'Unsuitable for heavy goods vehicles' signs they replaced remains to be seen. [Full story]

Using satnav to avoid temporary trouble spots isn't always the best idea, as drivers near Luckington recently found out. Blocked from their usual route by a crumbled wall, navigation systems sent them along an alternate route which included a ford, without carefully explaining to unwitting drivers that said ford was more of a river at over three feet deep.

"It seems that some people listen to their satellite navigation systems rather than look at the signs saying that the ford is unsuitable for motor vehicles," said local councillor Lesley Bennett. [Full story]

Pressing on is one thing; pressing the accelerator is another. One Belgian trucker, directed by his satnav into an unsuitable cul-de-sac near Wadebridge, ended his turning manoeuvre by ploughing over and devastating a mini roundabout, getting a car trapped under his lorry, and destroying five more vehicles.

He blamed his £20,000 rampage entirely on putting his foot down in a panic. The driver was banned from driving in England for a year, though sadly he's probably still allowed to have a satnav. [Full story]

If your village is consistently plagued by wedged-in trucks thanks to the misguided efforts of satnav systems, what's the solution? Wider roads? Clearer signage? No. If the actions of sleepy Barrow Gurney are to be followed, you politely ask for your village to be removed from the map altogether.

Although TeleAtlas has plans to release Lorry-specific GPS maps in the future, it seems that residents would rather their village disappear than deal with the chaos caused by over-sized vehicles navigating through its narrow streets. [Full story]

Never let your satnav be a judge of width and distance. A Czech lorry driver was forced to spend a whole three nights sleeping in his cab when he wedged his truck in an extremely narrow lane near Ivybridge, Devon.

His navigation system sent him along the lane - which features a 90 degree turn among other lorry-unfriendly features - as a shortcut to the A38. The driver had to wait several days for relief, because his haulage company deemed a weekend rescue too expensive. [Full story]