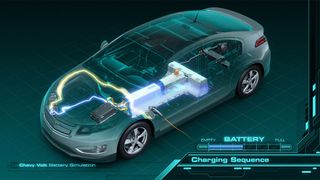 Battery longevity is a major problem for electric cars. But GM has come up with a way to make worn out batteries from its electric cars, like Vauxhall Ampera, useful. Turn them into back-up power supplies.

Working with ABB, a power and automation technology specialist, GM has successfully demoed a system based on five Chevy Volt batteries. Vauxhall, of course, is the UK arm of US car maker GM. The Volt is sister car to and carbon copy of the Vauxhall Ampera. Both models are sold in the UK.

The trick here involves the fact that batteries deemed unfit for use in an electric car are still good for as much as 70 per cent of their original charging capacity. That sounds bad, but it's a function of maintaining range and avoiding the kind of full discharge that really knackers lithium cell longevity.

With a battery as big as the Ampera's 16kWh lithium pack, that means five old packs are enough to power a few hours of back-up power to around three to five family homes.

Put it altogether and you have a multi-win scenario. Old batteries suddenly have greater market value, making their replacement more cost effective.

Households have a new, affordable avenue to a high-tech back-up power solution. And environmental concerns regarding the dumping of old batteries are at least partially addressed.

The system is still in the early testing stage, but GM plans to hook it up to the grid for further evaluation.