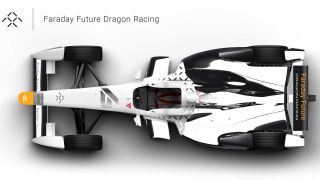 Faraday Future announced an alliance with Formula E's Dragon Racing. Starting in the third season, taking place in 2016 to 2017, Faraday Future (FF) will be the official technical partner and title sponsor for the Formula E team.

"Formula E has placed a significant emphasis on electric performance and connectivity, which makes it a great fit for Faraday Future," said FF Global Chief Brand and Commercial Officer Marco Mattiacci. "Formula E has leveraged a community of fans and embodies the competitive spirit that we also share."

The partnership will develop technology software for increased performance in an electric vehicle's powertrain. Not only is the partnership about improving technology, the Grand Prix seasons provide an exceptional place for real-life stress-testing in some of the most challenging settings across the globe.

"We are thrilled to welcome Faraday Future into Formula E. Faraday Future is a brand that is targeting the highest standard in terms of design, R&D, and manufacturing of electric cars," said FIA Formula E President Alejandro Agag. "We couldn't be happier that they have chosen Formula E to challenge some of the greatest car companies in the world. This announcement again proves that Formula E is truly the future of motorsport."

Researchers from FF will look at the Dragon Racing platform during Season 3 along with improving vehicle simulations for more detailed vehicle capabilities.

"Partnering with Dragon Racing allows us to further showcase our electric vehicle leadership and technical capabilities in one of the most exciting Formulas in the world," said Faraday Future Senior VP of Global R&D and Engineering Nick Sampson. "I clearly see Formula E as the right venue to challenge our engineers and technologies in the most extreme performance conditions."

Data will be used to improve vehicle performance during Season 4, including enhancements to powertrain software, firmware, components and other hardware. FF says this could include the Echelon Inverter, motors, and other technologies.

Faraday Future's FF Concept was FFZero1 Concept was unveiled at the Consumer Electronics Show earlier in 2016, and they were approved for public road testing earlier in July.

This isn't the first time that autonomous car manufacturers looked to Formula E for testing, late in 2015 Formula E announced that it would work on driverless races for Formula E Championships.